이미지 확대
Funds tracking commodity stocks are gaining grounds on growing demand for raw materials following the “phase-one” trade agreement between the United States and China and on volatile oil prices due to renewed tensions in the Middle East.

The average commodity funds tracked by FnGuide gained 7.92 percent in the past month, which is more than twice the sector-wide average of overseas stock funds (3.29 percent).

Overseas materials sector funds were one of the worst performing funds with a return of -5.17 percent mainly due to a fall in gold prices between August and November last year. But they achieved a dramatic turnaround thanks to expansionary manufacturing momentum in China, the world’s largest consumer of raw materials, after the Chinese government poured stimulus into the economy.

The Shinhan BNPP Focus Emerging Raw Materials Equity Investment Trust that invests in metal, mining, oil and gas companies in emerging countries generated a high return of 8.78 percent in the past month. 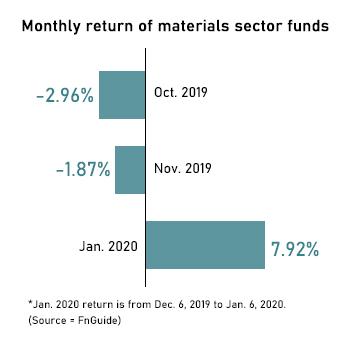 Crude oil price hikes were also tail winds for the commodity-following funds. Brent oil prices recently rose to $65 per barrel on expectations about the U.S-China trade talks and they are poised for further growth amid the escalation of tensions after top Iranian military commander Qassem Soleimani was killed in an U.S. airstrike in Baghdad last weekend.

The gold price rebounded to the $1,520 range per ounce in a month after falling to $1,480 early last month from a peak of $1,550 in August. The IBK Gold Mining Equity Investment Trust that focuses on gold mining stocks posted a return of 8.59 percent in the past month.

By Moon Ga-young and Minu Kim