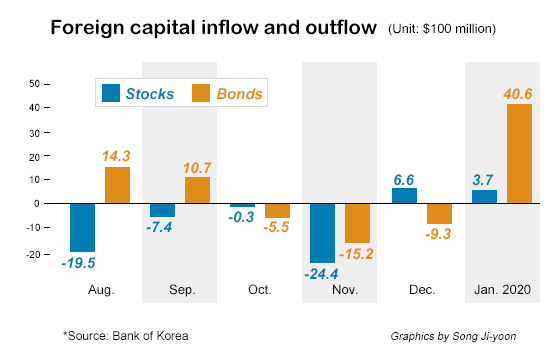 이미지 확대
Foreign capital inflow to the Korean securities market hit a seven-month high last month when the global financial market was rattled by fears that the coronavirus (COVID-19) outbreak would dent growth in the global economy.

Foreign net capital inflow to purchase Korean stocks and bonds amounted to $4.43 billion in January, the highest level since $4.78 billion tallied last June, according to data released by the Bank of Korea on Wednesday.

In particular, offshore investors showed an insatiable appetite for Korean bonds during the period, as their net capital inflow to the local bond market soared to $4.06 billion, the highest level since $4.56 billion last June.

In the stock market, foreigners injected additional $370 million over the same period. It was smaller than $660 million worth net buying in the previous month, but it was a relief that foreigners remained net buyers last month when the fast-spreading new coronavirus spooked investors world-wide turning them away from risky assets across the world.

South Korea’s sovereign credit default swap (CDS), which prices the default risk of individual countries, also remained stable in January. The CDS premium on the country`s foreign currency bonds with five-year maturities reached 23 basis points on average last month, down 1 basis point from a month earlier, according to the data. The spread on CDS reflects the cost of hedging credit risks on corporate or sovereign debt and its fall indicates improvement in the credit of corporate or government bonds.

In contrast, the foreign exchange market experienced a roller coaster ride in January as the Korea won’s average fluctuation range against the U.S. dollar widened to 4.6 won, up by 0.9 won from December. The won depreciated 2.6 percent against the greenback on Feb. 10 from the end of last year. Most emerging currencies turned weaker after Jan. 21 when concerns grew over the coronavirus spread.