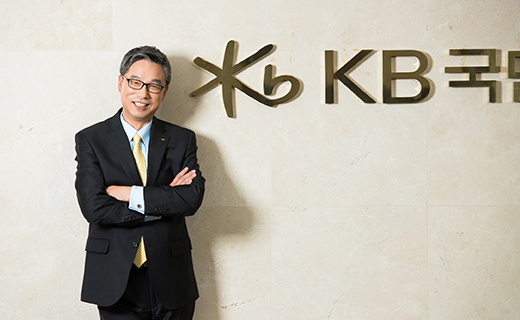 Incumbent CEO and President Hur Yin of South Korea’s leading commercial bank KB Kookmin Bank is widely expected to retain his position for a third time after the lender has triumphantly returned to the top position under his leadership.

Currently, Hur and Lee Dong-cheol, chief executive of KB Kookmin Card, are on the list of group chairman nominee list.

The industry, however, is betting high that Hur would serve a third term at KB Kookmin Bank given his high performance over the years. It is considered very rare for a financial institution’s CEO to serve three terms in a row in the country.

Hur is highly regarded for his leadership to lead KB Kookmin Bank to win the top position in the country’s commercial banking market in terms of net profit without exposing the bank to catastrophic risks from sales of derivatives-linked funds (DLF) or scandal-ridden hedge funds that have caused many individual investors and financial institutions massive losses since last year.

Park Jeong-rim, chief executive of KB Securities who was once considered a contender for CEO of KB Kookmin Bank, was excluded from the final nominee list after the securities firm under his leadership sold the scandalous funds managed by Lime Asset Management, and Park along with CEOs of Shinhan Investment and Daishin Securities are expected to face heavy disciplinary actions by the Financial Supervisory Service for the sale of such funds, which would ban these CEOs from seeking for another term or serving other roles in the financial industry for three to five years.

Hur – born in 1961 in Jinju, South Gyeongsang Province – studied law at Seoul National University for bachelors and masters. He started his career at Korea Long Term Credit Bank and joined KB Kookmin Bank in 1998 upon merger between the two lenders in the aftermath of the Asian financial crisis. At KB Kookmin Bank, Hur has taken roles in various divisions including corporate finance affairs, sales, credit review, and management planning. He was also the lender’s union head.