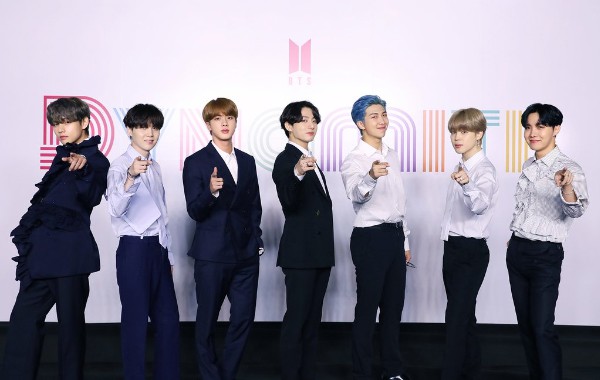 Big Hit Entertainment Co., the label behind K-pop sensation BTS, debuted Thursday with much fanfare on the main Kospi at double its initial offering price, but the superstar’s halo failed to keep the broader investors entertained.

The agency issued 7.13 million shares at 135,000 won each, pricing the stock at the top end of its range on strong investor demand. It had raised 962.6 billion won at a 4.8 trillion won valuation.

It landed 34th on the Kospi with a market cap of 8.73 trillion won.

The label’s public debut comes as BTS is rewriting K-pop history, claiming No. 1 and No. 2 on the U.S. Billboard Hot 100.

Earlier this week, the Military Manpower Administration announced it would allow K-pop stars to extend conscription to the maximum legal age of 30. With the change, the septet could be free of military duties for at least two more years.

Founded in 2005, Big Hit posted a net profit of 63.9 billion won and revenue of 416.7 billion won last year. Its largest shareholder is chief executive and founder, Bang Si-hyuk, who owns a 34.7 percent stake. His holdings are worth 1.67 trillion won at the IPO price and could soar to 4.34 trillion won if the stock closes the first day rising by the daily limit of 30 percent. 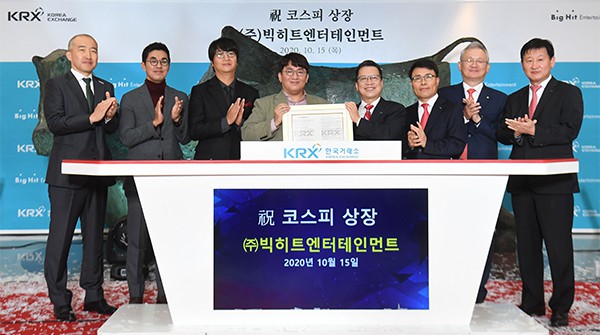 Each of the seven BTS members were also given company shares worth 9.2 billion won at the offering price. If the shares hit the daily ceiling on Thursday, this could be worth up to 24 billion won.

Out of the total 7.13 million shares, 60 percent had been allocated to institutional investors, of which 78 percent, or 3.33 million shares, were subject to a lock-up period of 15 days to six months.

Retail investors and employees each received 1.426 million shares, or 20 percent of the total.

Big Hit’s IPO ceremony was live-streamed via its YouTube channel. This was the first offline ceremony since the IPO of SK Biopharmaceuticals Co. in July as the event had been withheld to curb the spread of the coronavirus.