According to data from the NPS disclosed to the main opposition People Power Party lawmaker Suh Jung-sook on Tuesday, the fund upped its share in Samsung Electronics from 9.58 percent in 2017 to 11.1 percent at the end of June and Hyundai Motor from 8.45 percent to 11.52 percent. Its holding in Celltrion jumped almost nine times from 0.92 percent to 8.94 percent over the period.

The increased shareholding in line with adoption of stewardship code raises concern about the pension fund acting out to interfere in corporate affairs on behalf of the liberal government.

The stewardship code enforced in the world’s third largest fund since 2018 is a set of guidelines that encourage investors to be more vocal in corporate management to protect and strengthen shareholders’ rights. 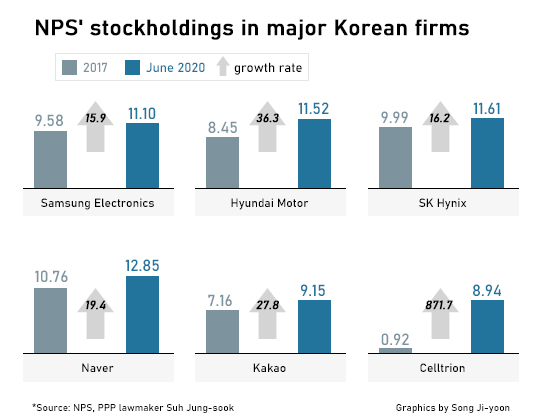 이미지 확대
According to Seoul-based business tracker CEO Score, the NPS voted against 682 motions out of 4,139 agenda on which it exercised its voting rights at shareholders’ meetings of 577 companies last year. The share of the objection votes reached 16.48 percent, up 4.63 percentage points from 2017.

Critics worry that the Fund Management Committee, the fund’s highest decision-making body, is structurally under the influence of political clout. The committee is led by Health and Welfare Minister and includes five former government officials as members.

“The Moon Jae-in government is posing a greater threat to businesses with increase in NPS’ stockholdings, stewardship code and expanded investments in environmental, social and governance (ESG) values,” Suh said, urging that the pension fund must focus on its primary mission to maximize people’s retirement savings.