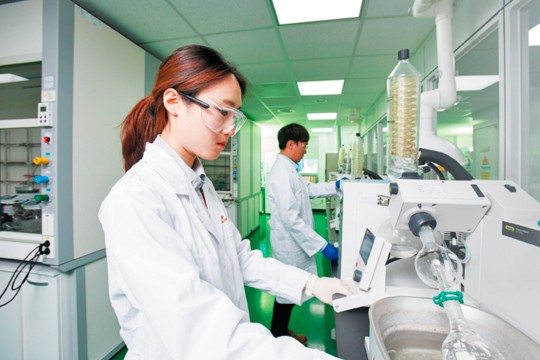 SK Biopharmaceuticals Co., the drug making unit of South Korean conglomerate SK Group whose stock price has been skidding after stunning IPO in July, could gain traction for upward movement if it joins the Morgan Stanley Capital International (MSCI) Korea Index in November.

SK Biopharmaceuticals has been under correction after institutions unleashed their holdings after lock-up period ended.

On Tuesday, shares of SK Biopharmaceuticals closed 1.67 percent lower at 147,500 won. The shares are undergoing the second phase of correction after losing 10 percent on Oct. 5 when large volume of safeguard deposits were released.

Investment sentiment turned buoyant on the expectations for a double joining of SK Biopharmaceutical and SK Chemical in MSCI Korea in November.

The increased supplies after the lock-up period ended have given the stocks eligibility to join the MSCI index. Circulating shares exceeded 15 percent of outstanding shares after institutions let go of their shares. SK Biopharmaceutical also meet market cap criteria as its exceed 10 trillion won.

When SK Biopharmaceuticals joins the index, about 116.7 billion won worth of foreign capital could be placed in the stock.

Kang Song-cheol, an analyst at Shinhan Investment, said that the possibility of SK Biopharmaceuticals joining the index has not been reflected in the stock price as of yet. Given the ban on short sale and the stock’s loss of over 10 percent since September, it has room to grow, he added.

SK Chemicals could also join the index in November after its share price skyrocketed on expectations for its virus unit. The company’s subsidiary SK Bioscience has been under spotlight after winning Covid-19 vaccine manufacturing order from the U.S.

By Kim Gi-chul and Lee Eun-joo