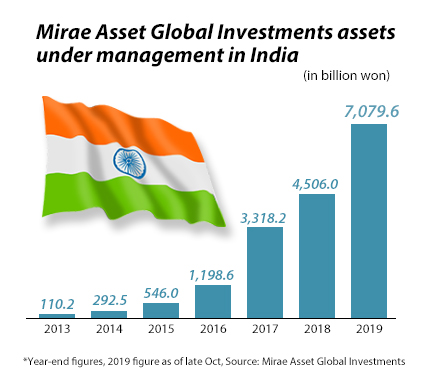 이미지 확대
South Korea’s Mirae Asset Global Investments will set up a holding company in India, a move that will significantly broaden its business in the country beyond fund management to loans and venture capital.

The company’s Indian unit gained a nod from the Securities and Exchange Board of India to shift to a holding company structure, its parent Mirae Asset Group said Thursday.

This would allow the company’s Indian entity to expand its business portfolio beyond fund management, to include real estate and corporate loans, venture capital funding in Indian startups and wealth management for affluent clients.

Mirae Asset Global Investments first entered India in 2006. Assets under management have swelled to 7.08 trillion won ($6 billion) as of late October, more than double the 3.32 trillion won it had in late 2017.

Park Hyeon-joo, founder and former chairman of Mirae Asset Group, is said to have groomed the Indian unit through 13 years of steady investment.

India’s BSE SENSEX, the stock market index of 30 well-established companies listed on Bombay Stock Exchange, tumbled 58 percent in 2008 in the wake of the global financial crisis. This drove many foreign asset management firms out of the country, but Park stood his ground, betting on India’s vast growth potential. India’s financial markets soon recovered under Prime Minister Narendra Modi, and Mirae Asset has since been reaping the benefits, registering average annual growth rate of 96 percent. 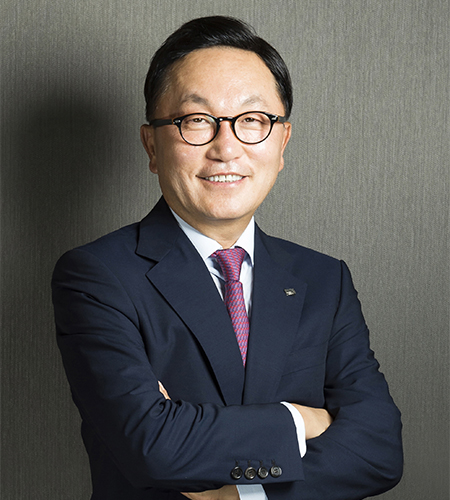 Park, in his message to employees in March, urged the company to double down on its Indian business, seeing more growth opportunities this year. He stepped down as chairman in May 2018 to spearhead the group’s global business campaign as the global investment strategy officer of Mirae Asset Daewoo Hong Kong.

For Mirae Asset Global Investments, localization has been a key part of its Indian strategy. It has only one Korean in its 139-strong unit, with the positions mostly filled with local talent.

Mirae Asset Daewoo, the group’s brokerage arm, also has first-mover advantage in India. It set up a local entity in October 2017 and obtained a brokerage license in January 2018, becoming the first Korean brokerage house to operate in the country. Its operating profit topped 20 billion won in the late third quarter.