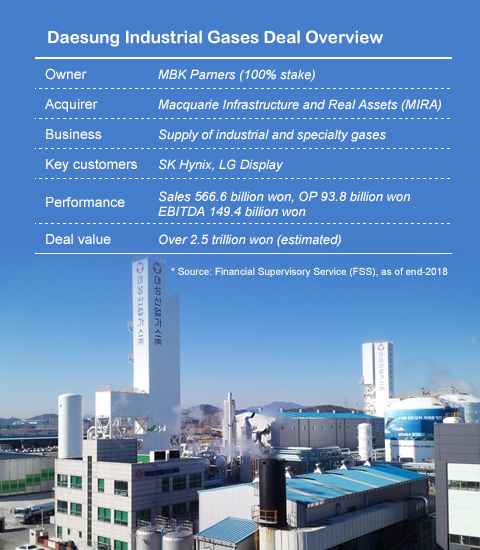 MIRA is one of the world`s leading alternative asset managers, specializing in infrastructure, real estate, agriculture and other real asset classes.

The agreement would make Macquarie the fourth new owner of the industrial gas provider in five years.

SK Hynix and LG Display are among major customers of Daesung Industrial Gases which was established as a joint venture between Daesung Industries and France’s Air Liquide in 1979. In May 2014, Goldman Sachs bought a 60 percent stake in the JV including 40 percent held by Air Liquide for 420 billion won.

The MIRA deal could mark yet another notable exit of the Korean PEF with a profit of some 1 trillion won from its divestiture in nearly three years. MBK’s latest outstanding reap was a 1.68 trillion won deal for Woongjin Coway.

MIRA raised 4 trillion won to form the Asian infrastructure fund last year and has looked for target assets. Daesung Industrial Gases is one of its first target groups this year. It conducted a due diligence process after entering into an exclusive negotiation period with MBK Partners early this month with a goal for completion on Nov. 29.

After the transaction, Macquarie’s EBITDA yield could reach 7 percent against its equity even though it pays more than 2.5 trillion won for the gas company.

By Han Woo-ram and Minu Kim