The Korean credit card issuer kicked off its IPO last month, sending out proposals to 10 investment banks to join its listing process. Affinity Equity Partners, which holds the largest stake in the company among its financial investors, is also said to be deeply involved in the talks.

The valuation of Hyundai Card is estimated at around 2 trillion won to 2.5 trillion won ($1.7 billion-2.1 billion), a mega-sized IPO that is expected to draw attention from not only local but foreign investors.

Hyundai Card has not yet set a date for the preliminary filing with the Korea Exchange. But its chief executive, Chung Tae-young, has expressed wishes to push back the listing to after 2021 to bolster the company’s market value.

To get a fair value against the domestic slump, the credit card issuer must be able to come up with a sustainable growth plan, market watchers said.

Hyundai Card would be the second credit card stock after Samsung Card, which went public 12 years ago. 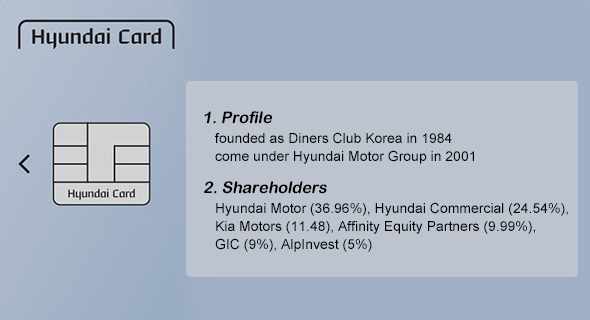