Of the three, Aekyung Group team has surfaced as a formidable bidder through surprise addition of Korea Investment with reputable fund-raising credentials.

The cash-rich HDC consortium still is a strong candidate. HDC has a cash hoard of over 1 trillion won and Mirae Asset Group Park Hyeon-joo is eager in joining aviation. 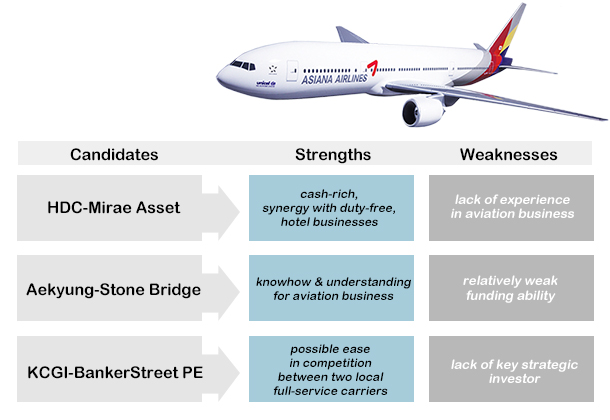 이미지 확대
KCGI wants to command interests over the country’s two full-service carriers. The activist fund has pushed up its ownership to 16 percent to strengthen its influence over Hanjin KAL, the parent company of Korean Air Lines, as the second largest stakeholder.

Up for sale is a 31 percent controlling stake plus management rights through the handover of existing shares worth 400 billion won and issue of new shares worth 800 billion won in the country’s second largest full-service carrier.

When counting in the six subsidiaries including Air Busan, Air Seoul and Asiana IDT, the value could expand from 1.5 trillion won to 2 trillion won. Its creditors have threatened to find a buyer on their own, if the deal is not signed by the year-end.