이미지 확대
Kakao Corp., operator of South Korea’s largest mobile messenger achieved its best operating income since 2015 when the company was re-launched as Kakao with its revenue setting a new record high in the third quarter, propelled by a rise in both business platform and paid content sales.

The company in a regulatory filing on Thursday reported its operating profit for the third quarter ended September came at 59.1 billion won ($50.9 million) on a consolidated basis, jumping 46.0 percent from the previous quarter and 92.7 percent from the same period a year ago. The figure is the best quarterly result since the company was re-launched as Kakao in 2015 after its merger with Daum in October 2014.

Its shares finished Thursday at 151,000 won, unchanged from the previous session`s close.

The company said its business performed well across the board, especially its mobile messenger Kakao Talk related business platforms and the paid-content business. 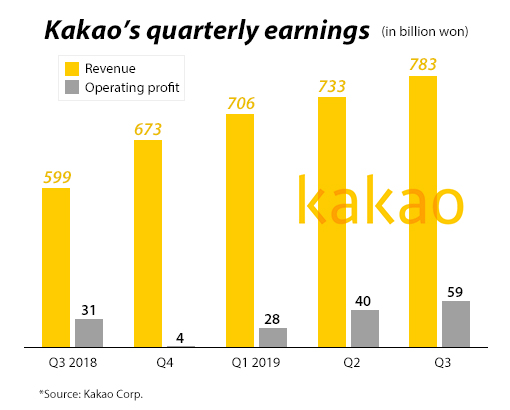 이미지 확대
Its platform business, which includes the messenger linked business and internet portal, delivered 350.7 billion won in revenue, up 7.3 percent on quarter and 38.6 percent on year.

The messenger linked business platform contributed 162.4 billion won in revenue, with the figure jumping 16.9 percent on quarter and 51.6 percent on year, thanks to brisk performance by Talk Board – a service within Kakao Talk through which users can purchase goods. Portal business sales fell 8.0 percent from the previous quarter but gained 9 percent on year to 126.1 billion won. Revenue from new businesses including mobility and Kakao Pay totaled 62.3 percent, up 22.2 percent on quarter and more than doubled from a year-ago period.

Its content business registered 432.4 billion won in revenue for the third quarter, expanding 6.5 percent from the second quarter and 24.9 percent from a year ago.

Kakao said it will continue strengthening Kakao Talk-linked business, including expanding advertising business on the messenger app, and add new services such as chatbot in the future. For the content business, the company plans to accelerate its global push. The company currently offers paid content services in Japan and Indonesia and mulls expanding its presence across Southeast Asia next year.