Korean investors wary of risks add $19 bn in savings, MMFs in a month 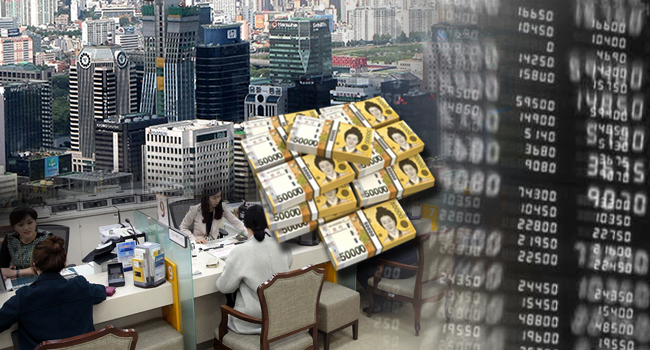 이미지 확대
South Korean investors are opting to park their money in fast cashable bank accounts and money market funds, with the balance in the two adding 22 trillion won ($19 billion) in just a month, although they hardly yield with deposit rates at all-time low, amid uncertainties in markets at home and abroad.

The sharp increase in savings and MMF accounts is timed with soured investment sentiment toward market-sensitive assets such as equity-linked securities (ELS), reasoned market experts. ELS and high-risk products caused a fright after massive losses in investment linked to assets in Germany and Hong Kong.

Some also rushed to deposit before the rates hit the bottom. 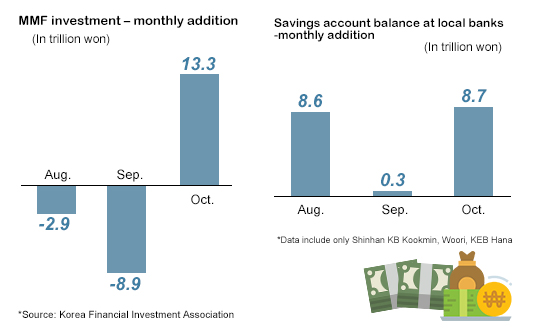 이미지 확대
Currently, interest rates on savings accounts at the country’s major banks hover slightly above 1 percent. But the rates are expected to go further down as local lenders entering this month started reflecting a quarter-percentage point cut in benchmark rate delivered last month. The Bank of Korea at its October rate-setting meeting pushed the policy rate down to 1.25 percent. It was its second cut in a year.

“Investors have grown wary of high-risk investment products from the recent money-losing event related to derivates on top of global economic slowdown,” said a financial industry official. “This has caused investors to wait out the market, by parking their extra funds at savings accounts and MMFs.”

The change in investor sentiment was also seen in private equity fund market. According to the Korea Financial Investment Association, the number of private equity funds in the country contracted by 302 in three months to 11,177 as of the end of October.