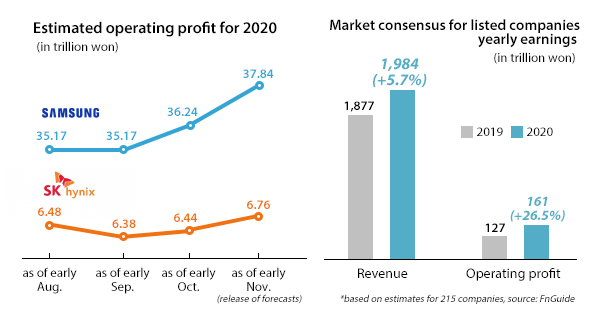 이미지 확대
Korean Inc. is expected to do better in 2020 led by recovery of chipmakers, latest earnings projections show.

According to estimates compiled by Seoul-based financial data provider FnGuide, combined operating profit of 215 companies publicly trading on Korean bourses is estimated to reach 161.53 trillion won ($139.14 billion) next year, up 26.5 percent from estimates for full 2019.

A majority of them, or 196 names, is forecast to report on-year gains in operating profit. The outlook was not bright for 19 including Posco and Daewoo Shipbuilding & Marine Engineering.

Market experts expect earnings improvement for next year in general on renewed hopes for improvement in global economy through rate cuts from major central banks recently, eased trade tensions between the U.S. and China, and a rebound in global chip demand.

The market started betting on bottomed-out earnings, with estimates for combined operating profit of 250 listed firms up 5 percent on year to 29.99 trillion won for the final quarter.

Markets also upped projection for SK Hynix’s profit to 6.76 trillion won, which would be a whopping 134 percent gain from this year’s estimated 2.09 trillion won. Its estimates have been upgraded from 6.39 trillion won (up 5.8 percent) two months ago and 6.44 trillion won (4.9 percent) a month ago.

Samsung Electronics shares closed Monday 2.15 percent higher at 52,300 won in Seoul, hitting the highest in 17 months. SK Hynix also renewed its 52-week high with 84,700 won on Monday, up 1.93 percent from the previous session.

By Chung Seung-hwan and Lee Ha-yeon