이미지 확대
Lime Asset Management Co. came under investigation by the Korean financial authority after it failed to make payment obligations of 620 billion won ($519.8 million) to its fund investors due to shortage of liquidity.

The Financial Supervisory Service (FSS) on Sunday initiated a probe on the country’s top hedge fund and demanded the company to specify plan to meet its payment dues to its customers. The company has deferred payment on three funds on Sept. 1, and its denied redemption reached 620 billion won by Tuesday.

“The fact that Lime Asset failed to repay on some closed-end funds on time called into serious question on the company’s management ability,” an FSS official said. An open-end fund that allows investors to exit the fund anytime holds some temporary liquidity risks, but a closed-end fund allows investors to redeem their investment on a prescribed date. Closed-end funds accounted for 180 billion won out of the total 620 billion won worth funds on which the company suspended payment, according to sources. 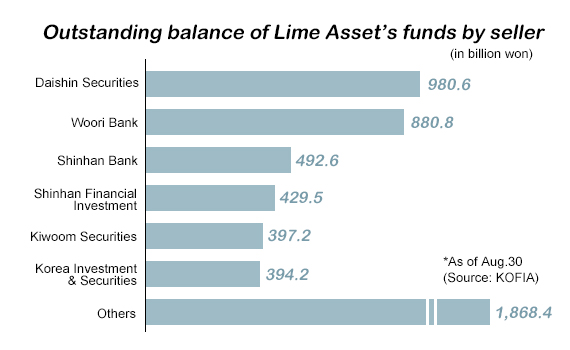 이미지 확대
The Financial Services Commission (FSC) also said it would closely monitor the situation and arrange measures in cooperation with the FSS to prevent massive losses or default.

The FSS is considering extending the scope of its on-site inspection on alleged unfair trading practices by Lime Asset Management. The company has been suspected of illegally trading convertible bonds of listed-firms with non-listed companies in collusion with large-sized brokerage houses to increase returns. The FSS has already launched a probe on the matter in late August.