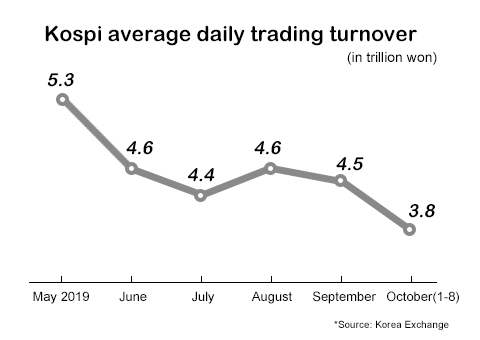 이미지 확대
Trade remains thin at Seoul’s main bourse, with the secondary Kosdaq market outperforming Kospi on trade turnover amid little signs of upsides to the Korea Inc. and economy.

According to the Korea Exchange, the Kospi’s trading value has averaged 3.86 trillion won ($3.2 billion) for the first nine days this month. It is the first time this year that daily turnover fell below 4 trillion won for four straight sessions.

A thin market of low liquidity can be more volatile and susceptible to outside factors.

The sluggish market in August recovered in September, with the index gaining more than 4 percent on hopes for a recovery in the global market following the working level trade talks between the U.S. and China and U.S. Federal Reserve’s rate cut. But the overall sentiment remains lethargic with lingering uncertainties.

Because of less investment in large-cap stocks and movement by big foreign and local institutions, the Kospi market became thinner than junior Kosdaq, whose daily transaction averaged 4.77 billion although its market is just one-sixth of the bigger counterpart.

Heavyweight biotech stocks in the Kosdaq were battered last month following news that biopharmaceutical company Helixmith Co. has to restart the placebo-controlled phase 3 trial of Engensis (VM202), an investigational drug to treat diabetic neuropathy. But bio stocks came under bargain hunting after they became cheap.

Foreign investors have net purchased 275.1 billion won in Kosdaq so far this month, and their buying amounted to 231.8 billion won on Tuesday alone, according to the Korea Exchange.