이미지 확대
Short-selling in South Korean shares shrank 21 percent on month in September as sentiment improves on the Korean bourse.

According to data released by the Korea Exchange, short sale in the main Kospi and secondary Kosdaq markets averaged 393.7 billion won ($328 million) daily in September, down 20.95 percent from the previous month.

Short-selling transactions reached 419.3 billion won in June, 411.1 billion won in July and near 500 billion won in August on skepticism in Korean Inc. and economy as the result of protracted trade tensions between the U.S. and China and soured relationship with Japan.

Short selling is a legitimate investment scheme where investors who bet on a drop in a certain stock can borrow the stocks and sell them, and then make a profit on the difference if the stock price actually falls later.

Money was made less for short sellers due to broad market recovery last month, when the main Kospi and secondary Kosdaq added 4.84 percent and 1.84 percent, respectively. 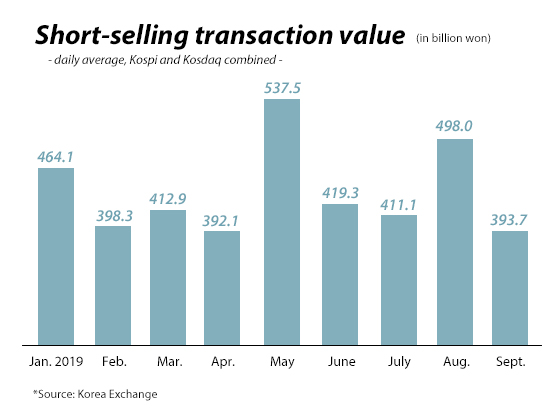 이미지 확대
Mood has recovered on anticipation of better performance by bellwether chipmakers as international prices show sign of bottoming out. Some expect the Kospi to go above 2,100 this month.

The other four that dropped last month are Lotte Tour Development (down 14.5 percent), Netmarble (down 0.63 percent), Seoul City Gas (down 4.27 percent), and Hanmi Science (down 4.58 percent).