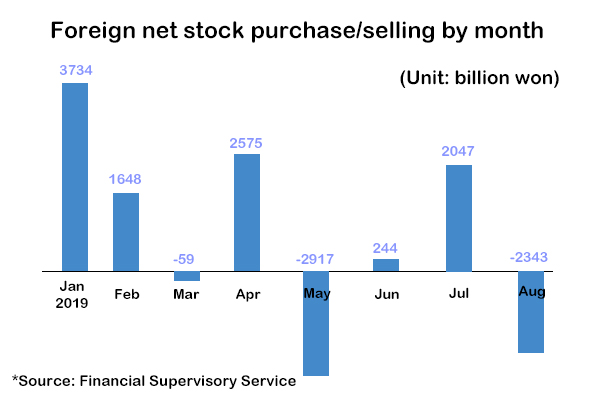 이미지 확대
Foreigners have cashed out of Korean stocks while renewing their debt holding amid expectations for a rate cut in Korea last month.

The Financial Supervisory Service said Monday foreigners net sold 2.34 trillion won ($1.96 billion) worth of Korean stocks in August, the largest after the net sale of 2.92 trillion won in May.

The biggest sellers were Britain and the United States, respectively unloading 772 billion won and 764 billion won of stocks. They were followed by Luxembourg (327 billion won), Saudi Arabia (226 billion won) and France (223 billion won).

Malaysia stood as a net buyer, purchasing 88 billion won of local stocks. The Virgin Islands and the Netherlands bought 77 billion won and 75 billion won each. Japan stood on the buying side with net 41 billion won.

By region, Asia showed the biggest purchase at 2.3 trillion won, followed by the Middle East and Europe at 400 billion won each and North America at 20 billion won.

As of last August, foreigners held 125.9 trillion won of local bonds, or 7 percent of all bonds in circulation, hitting another record high after the 124.5 trillion won in June.