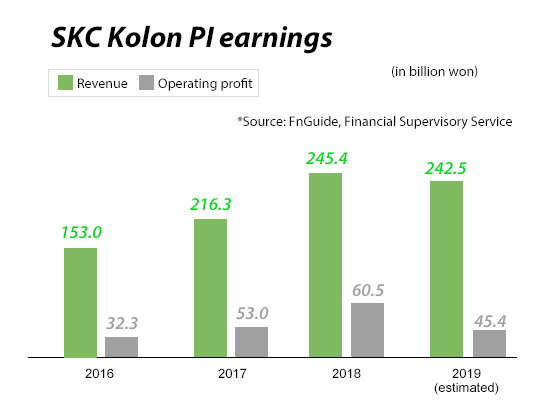 According to investment banking industry sources on Thursday, six private equity funds from home and abroad, including Hahn & Co., Glenwood Private Equity, Carlyle Group, MBK Partners, IMM Private Equity, have submitted their preliminary bids for a 54 percent stake in SKC Kolon PI owned by SKC and Kolon seeking to fetch at least 700 billion won for the company whose value is estimated at 1.3 trillion won.

Founded in 2008, SKC Kolon PI is a joint venture of SKC Co., a chemical and tech material producing unit of SK Group, and Kolon Industries Inc., a chemical and fashion unit of Kolon Group. The two companies each own a 27.03 percent stake in SKC Kolon, and their entire stakes are for sale.

The joint venture is the world’s largest polyimide film maker, commanding nearly 30 percent of the global market as of last year. Polyimide materials, flexible and highly resistant to heat and chemical, are used in various applications ranging from displays and flexible printed circuit boards to insulating film. The company registered 60.5 billion won in operation profit on sales of 245.4 billion won in 2018, up 14.2 percent and 13.4 percent, respectively, from the previous year.

Despite its solid business performance, market experts are mixed about the company’s growth outlook due to heated competition. To ensure dominance, SKC and Kolon have recently expanded investment on the development of transparent PI film, which has emerged as the next promising material that will rapidly replace colored PI film, the company’s mainstay business. Colorless film is considered as a core material for a foldable smartphone.

By Park Jae-young and Cho Jeehyun