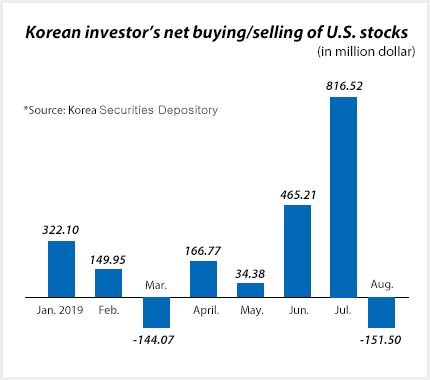 이미지 확대
South Korean investors have begun to take their money out of U.S. stocks amid talk of a looming recession in the world’s largest economy as the result of protracted trade war between the United States and China.

Korean nationals got rid of $2.01 billion worth of their holdings in U.S. stocks last month, surging 76.1 percent from July, according to the Korea Securities Depository on Thursday. They bought $1.86 billion worth, down 4.8 percent, resulting in net sale of $151.5 million in U.S. equities.

Korean investors in July had net bought $816.5 million worth of U.S. stocks, doubled from previous month.

The ebb comes amid mixed readings about the U.S. economy with some seeing a recession in the making. After Washington and Beijing renewed tariff war in August, the Dow Jones Industrial Average lost 1.72 percent while the broader S&P retreated 1.81% and Nasdaq Composite index 2.6 percent. They were no better than Korean stocks as the Kospi lost 2.8 percent over the same period.

As of the end of August, the outstanding deposits in U.S. stock accounts held by Korean nationals stood at $7.16 billion, down 3.1 percent from a month earlier.

Korean investors are pulling out of other markets. They net sold $47.4 million worth in Hong Kong-listed shares, compared with net purchases worth $46.7 million a month earlier. Net sale of Japanese stocks widened to $1.99 million in August from $1.29 million in July.

Koreans held onto Chinese stocks, net purchasing $33.1 million worth in August, slightly up from $32.93 million in July.​

By Jung Hee-young and Cho Jeehyun