이미지 확대
Overseas fund investments by Koreans have sharply increased this year amid lackluster asset prices at home, with the bulk placed in funds devoted to alternative assets.

The outstanding balance in overseas fund investment by Koreans totaled 166.8 trillion won ($137.9 billion) as of the end of August, surging 30.9 trillion won or 23 percent from the end of last year, according to Korea Financial Investment Association on Tuesday.

The bulk has been in private placement as publicly available funds increased by a mere 3.3 trillion won.

Investment in non-traditional assets jumped amid resurging of low-interest environment and volatility in financial markets across the world, with the balance totaling 21.2 trillion won to make up two-thirds of the additions in overseas funds this year. Assets in funds investing in offshore real estate rose 9.7 trillion won. The balance in special asset funds investing in non-securities such as gold, crude oil, and aircraft increased by 11.5 trillion won. 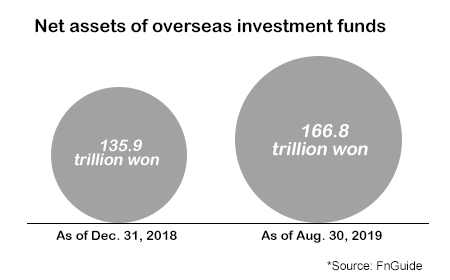 By Chung Seul-gi and Cho Jeehyun