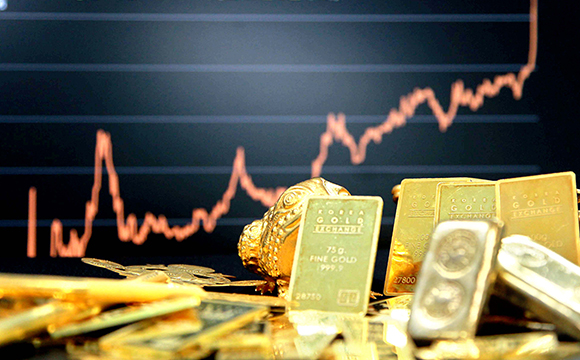 이미지 확대
The surprise cut in benchmark rate as well as this year’s growth estimate to the lowest in 10 years gave another impetus to a rush towards safe assets in Korea, sending gold prices to fresh record highs and debt prices to three-year highs.

Upon opening, gold prices were traded at 54,110 won per gram, up 1.08 percent from closing a day earlier, and widened increase during the day on news that BOK slashed the policy rate by 25 basis points to 1.5 percent. The central bank also cut this year’s growth estimate to 2.1 percent, which would be the most subdued growth since recession-hit 2009.

Gold prices in Korea have shot up 17.52 percent from 46,240 won per gram in the beginning of the year, and 3.11 percent since July 1 when Japan announced restrictions on shipments of key chip and display-related materials to Korea.

Prices of gold – a major safe asset – tend to rise when uncertainties grow in the market as investors’ appetite for safe assets grows. Gold also offers no yield, which makes it move in the opposite direction to interest rates.

Debt market also surged on new bets on an additional cut. The three-year government bond finished Thursday at 1.345 percent, the first dip under 1.4 percent since the seven-day repurchase rate was cut to a record of 1.25 percent in June 2016. The 10-year paper fell below the policy rate of 1.50 percent, yielding 1.472 percent after the rate cut.