이미지 확대
Foreign investors stayed long in Korean debt last month amid signs of profit-taking after a bull run for the last few months on growing expectation that the Bank of Korea will wait out until next month to lower the policy rate instead of July.

According to the Financial Supervisory Service on Monday, foreign investors net purchased 5.8 trillion won worth of bonds listed in Korea in June to bring up their total net holdings to a fresh high of 124.5 trillion won ($105.5 billion) to account for 7 percent of Korean debt in circulation as of the end of June.

Foreign investors have been net buyers of Korean bonds since March this year. They have continued to stock up Korean debts that offer higher returns than others in the same sovereign credit rank. Korea is rated AA from global credit agency Standard & Poor’s. It is the third highest and also higher than Japan’s A+ and on par with France’s AA but Korean debts yield higher on greater chances of a rate cut.

A weaker won against the U.S. dollar also added appeal to the Korean papers. 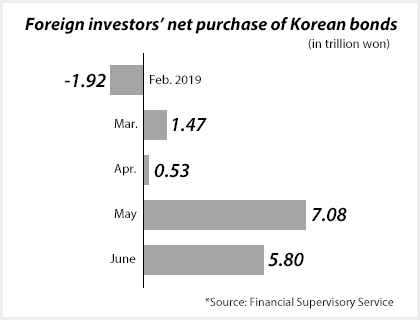 이미지 확대
Foreign nationals stayed put even as debt prices fell over the last week on profit-taking over the heavy bets on a rate cut as early as this week.

The yield of 10-year Korean government bonds ended Monday at 1.582 percent, up 1.3 basis points from the previous session and 5.2 basis points from a week earlier. Yields and prices move in opposite directions.

Traders expect the BOK will opt to put off a rate cut until the U.S. Federal Reserve makes the move first, which is believed to come as early as the end of July.