이미지 확대
The row over historic issues spilling over to the economic front has been denting shares of Japanese high-tech material vendors as they could lose one of their biggest and most reliable clients – chipmakers in Korea.

Japanese high-tech materials companies have largely remained weak in their stock price since July 1 when the Japanese government announced its export curbs on the three key materials – fluorinated polyimide, photoresists and hydrogen fluoride (or etching gas) that are vital in semiconductor and display production.

Samsung Electronics and SK Hynix are their largest customers, and worries are growing that the Japanese suppliers could be hit hard if the two Korean companies switch to other suppliers or localize necessary materials.

Shares of Korean semiconductor companies gained as supply control on fear of disruption in production at the two chipmakers responsible for more than 70 percent of DRAM chips around the world could turn DRAM prices to strengthen. Japan supplies around 90 percent of Korean demand for photoresist and fluorinated polyimide and 44 percent of etching gas.

Samsung Electronics lost 1.5 percent in early days of July, but rebounded last week for four days in a row. Shares of SK Hynix also rose 7.5 percent in the same period. 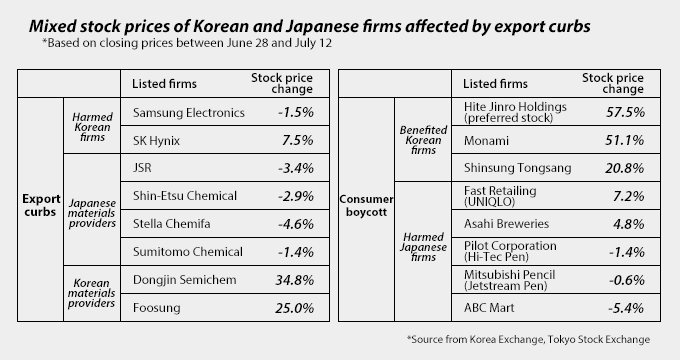 Shares of Korean semiconductor materials producers also climbed significantly on expectations that they could gain growth momentum in case the government and their major customers go all out to foster the growth of the country’s high-tech materials industry in response to Japan’s export curbs.

By Yoo Joon-ho and Minu Kim