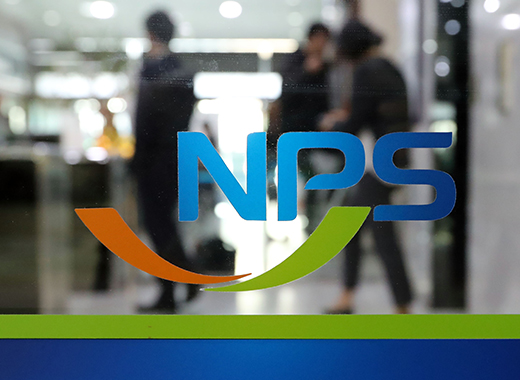 The nation’s sole stock exchange operator Korea Exchange and NPS recently announced that the fund has changed its stake-holding in 128 companies. Most of the firms where the fund newly posted stockholding of minimum 5 percent and increases by more than 1 percentage point were fashion brands, game publishers and entertainment agencies.

The world’s third largest pension fund disclosed last week that it owns a 6.04 percent stake in the country’s mid-sized fashion firm F&F, and it raised its stake in sportswear firm Fila Korea by 2.1 percentage points from 7.69 percent to 9.79 percent.

Hana Financial Investment forecast bright outlook on F&F given the fast sales growth of its MLB brand, and estimated sales of its outdoor label Discovery would grow 9 percent this year, MLB 20 percent and MLB Kids 10 percent. 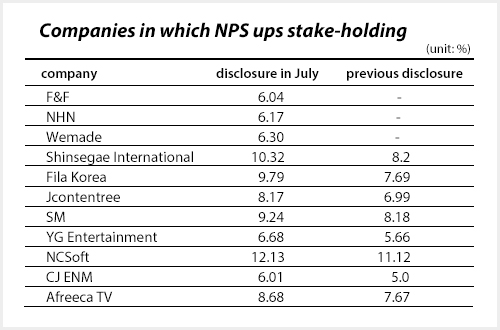 이미지 확대
The NPS also holds a 6.17 percent and 6.30 percent stake in game companies NHN Entertainment and Wemade, respectively. NHN is scheduled to release its new mobile game Dr. Mario World on July 10. The fund recently became the largest shareholder of NCSoft, another online game publisher, by upping its stake from 11.12 percent to 12.13 percent.

As for entertainment firms, the fund increased its stake in YG Entertainment from 5.66 percent to 6.68 percent at a time when the company’s stock price plummeted due to a string of sex and drug scandals involving its artists and executives. NPS’s holding in SM Entertainment also went up from 8.18 percent to 9.24 percent on the back of expectations on governance structure overhaul. It also upped its holding in Jcontentree from 6.99 percent to 8.17 percent and CJ ENM from 5 percent to 6.01 percent.

Meanwhile, NPS announced on Monday that its assets reached 701.2 trillion won ($595.2 billion) as of last Friday, exceeding 700 trillion won for the first time in 31 years since the fund was established in 1988. Its assets were equivalent to 37 percent of the nation’s gross domestic product (GDP).

By Chung Seul-gi and Choi Mira