According to data released by Daishin Governance Research Institute on Wednesday, 37 companies or 1.8 percent out of 2,068 firms listed firms with a fiscal year ending December - 763 on the main Kospi bourse and 1,305 on the secondary Kosdaq – received suspended or adverse opinion from outside auditors last year. The figure was up from 25 firms or 1.2 percent out of 2,007 companies in the previous year.

The number of firms that were given a disclaimer of opinion reached 30 in 2018, growing 1.6 times from 19 firms a year ago. The remaining seven companies were granted a qualified opinion. 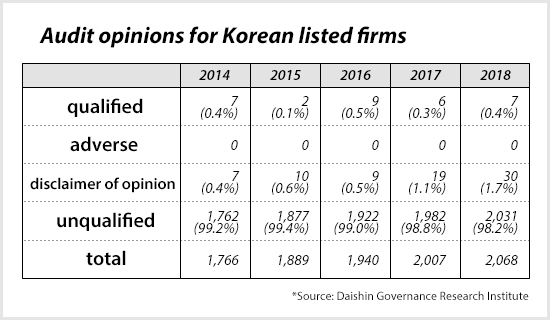 By asset size, 20 of the 37 firms with unclean audit reports had total assets worth less than 100 billion won ($84.4 million) and 15 companies had less than 300 billion won in assets. One was with assets less than 500 billion won and the other had assets more than 1 trillion won.

Out of the 37 companies, 31 were Kosdaq-listed ones that accounted for 83.8 percent.

Total 2,031 firms or 98.2 percent received clean audit reports last year, slightly below the average of 99.1 percent over the past three years.

By Chung Hee-young and Choi Mira