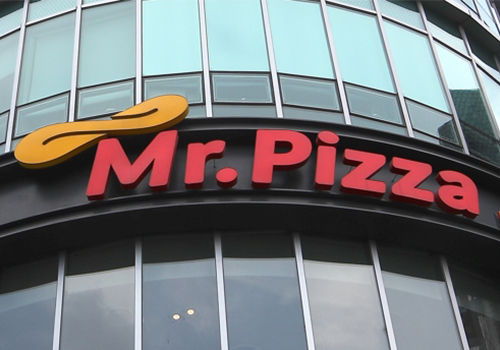 이미지 확대
South Korea’s scandal-ridden MP Group, parent of home-grown pizza chain Mr. Pizza, has been given the last eight-month grace period to turn itself around before it gets the final boot from the bourse.

According to the Korea Exchange on Monday, the exchange’s review panel granted MP Group’s request to stay on the secondary Kosdaq market for the next eight months while improving its business. Upon the decision, MP Group is subject to report the results of its action plans for improvement within seven days from Feb. 10, 2020 for the final decision.

MP Group had been embroidered in a number of scandals since 2015. The owner family was found to have profiteered from overcharging franchisees for cheese supplied by a company owned by the family of former MP Group Chairman Jung Woo-hyun. He also was accused of being involved in unfair practices such as opening new stores near outlets operated by its former franchisees in retaliation against their withdrawal from MP Group.

The accusations followed his assault of a company guard in April 2016, a high-profile scandal that caused customers to boycott the brand. He made a public apology and stepped down as CEO and then was brought to trial on charges of embezzlement and breach of trust in July 2017.

The company came under a shameful spotlight after the series of incidents, and the exchange suspended trading of its shares. It earned a grace period for improvement twice but failed to recover from the poor publicity and sales.

The company does not get a second chance as it would have used up total two-year grace period after its last eight-month time is up by February 2020.

By Shim Hee-jin and Lee Ha-yeon