Short-selling hits 7-mo high in May amid widening skepticism on Korean Inc.

이미지 확대
Short-selling in Korean shares surged to their highest in seven months in May to suggest deepening skepticism on the Korean Inc.

According to Korea Exchange on Monday, the total daily trading value of short-selling transactions on the main Kospi and secondary Kosdaq markets averaged 537.5 billion won ($454.5 million) in May, up 37.1 percent from a month earlier.

Short selling is a legitimate investment scheme that allows investors to borrow shares and sell them immediately on the assumption that share value will go down. Investors later repurchase the shares at a lower price to make profit on difference.

In May, the country’s main Kospi and secondary Kosdaq retreated 7.3 percent and 7.7 percent, respectively. As many as 308 stocks or 14 percent of publicly trading companies touched their 52-week bottoms. 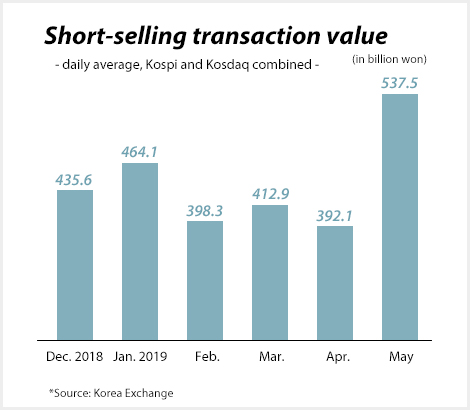 이미지 확대
The sharp hike in short-selling transactions is also the result from selling spree by foreign and institutional players as the trade means is limited for retailers.