이미지 확대
Managerial executives have been digging into their own wallets to buy treasury shares to help defend their company shares as a host of stocks hit new yearly lows amid bearish run in the Korean markets.

According to the Financial Supervisory Service on Tuesday, major shareholders and executives of six Kospi-listed firms including Samsung Electronics, KCC, HDC, LS, Hyundai Green Food and Green Cross Holdings purchased a combined 1 billion won ($848,104) worth stocks over the past month.

Samsung Electronics Co. Vice Chairman Kim Ki-nam who heads the company’s device solution division bought back 25,000 shares in the company worth 1.07 billion won, 42,882 won apiece, during the market hours on May 15. Koh Dong-jin, head of the IT and mobile communication unit at Samsung Electronics, also purchased 1.06 billion won worth shares on May 22 to 24 at 42,662 won per share. 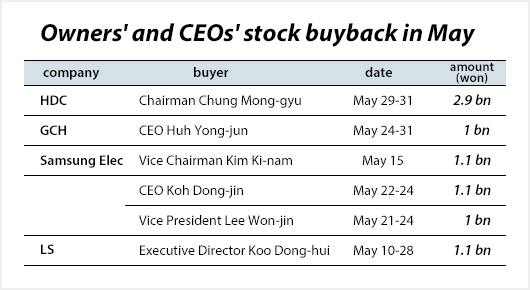 이미지 확대
High-ranking officials of the nation’s biggest company purchased their company stocks in January, March and April this year, but all of the buybacks amounted to less than 100 million won. The tech behemoth repurchased a combined 3 billion won worth stocks in May alone, including the 978 million won worth purchase by Lee Won-jin, executive vice president.

Stock purchases by high-rank company officials are mostly taken to boost investors’ confidence in the companies.

KCC Corp., the country’s building and industrial materials company, also conducted a share buyback to lift its stock price that had dipped due to the poor earnings. KCC Chairman Chung Mong-jin and his eldest daughter and managing director Chung Jae-lim purchased 2.5 billion won and 1.5 billion won worth shares, respectively. The company recorded 22.8 billion won in operating profit in the first quarter ended March, down 58.9 percent from the previous year. Sales fell 14.7 percent to 781.7 billion won.

In order to snap the protracted downward spiral of stock price, Chung Mong-gyu, Chairman of HDC Holdings Co. also bought 2.9 billion won worth shares in the company on May 29 and 31. Stocks of the nation’s leading construction and engineering company have been on a decline due to the short selling occurred during a stake swap deal between the holding entity and its operating unit Hyundai Development Co. and massive rights offering.

By Yoo Joon-ho and Choi Mira