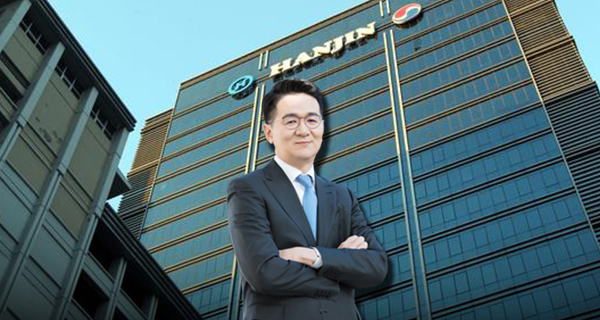 이미지 확대
Hanjin Group, undergoing a hereditary succession after the death of the patriarch of the family-owned conglomerate that operates Korea’s flag carrier Korean Air Lines, is finding the task more challenging and costlier than expected as it now has a hawkish outside shareholder to report to on financial transactions and management moves involved in the procedure.

Hanjin Kal and Hanjin Transportation revealed in their regulatory filings Tuesday that KCGI has filed an inspection against the two companies at Seoul Central District Court.

KCGI is the second-largest shareholder of both companies, holding 15.98 percent in Hanjin Kal and 10.17 percent in Hanjin Transportation. The fund has stated it would take an active role in the management of the two firms to improve governance.

Under the 2011 revised commerce act, a shareholder of a certain holding can ask the court to assign an auditor to investigate whether management moves or decisions are in line with corporate or statutory mandates. Based on the auditor’s findings, the court proposes an out-of-court settlement by drawing remedial actions from the management.

Earlier in April, Hanjin Group Chairman Cho Yang-ho died of a chronic illness, weeks after he lost his 27-year tenure on the board of Korean Air amid a string of scandals surrounding him and his family. His only son, Cho Won-tae, took over the helm as the new chairman of the aviation conglomerate. But speculations surfaced of a sibling feud over management control when the company failed to name a new representative chief in time, causing the Fair Trade Commission (FTC) to push back the announcement of its annual revised listing of business conglomerates.

이미지 확대
The Seoul-based activist fund is reportedly seeking inspection on two fronts. First is whether the severance package of the late chairman Cho Yang-ho was rightly calculated. The fund is demanding to know the amount and details of compensation package for the deceased.

The late Cho received a combined 10.7 billion won ($9.08 million) in compensation last year from five Hanjin affiliates including Korean Air, Hanjin Kal and Hanjin Transportation, according to company disclosures. Based on the figures, Solidarity for Economic Reform, a local civic organization, estimated Cho’s severance package to be around 60 billion won. Korean Air announced last month it delivered a severance package of 40 billion won but, according to the family’s wishes, did not include a retirement bonus, which could reach up to twice the amount of the severance pay.

KCGI has also sought an inquiry into Cho Won-tae’s appointment as chairman to determine whether the succession followed legitimate procedures including approval from the board and compliance with the FTC filing.

Hanjin Group said all decisions were made in full compliance with internal procedures and that it would challenge KCGI’s claims in court. KCGI has not released an official statement on the issue.

Industry insiders say KCGI’s legal action is partly a move to limit the family’s ability to use the retirement package in footing the hefty inheritance tax bill, which by some estimates could reach up to 200 billion won. The late Cho held a 17.84 percent stake in Hanjin Kal. The younger Cho owns 2.34 percent of the company, with his two sisters holding similar stakes at 2.31 percent and 2.3 percent, each. The Cho family together owns a combined 28.95 percent stake in the holding entity.

KCGI has been pressuring Hanjin Kal to improve its corporate governance and has gradually upped its holdings since buying a stake in the company late last year.