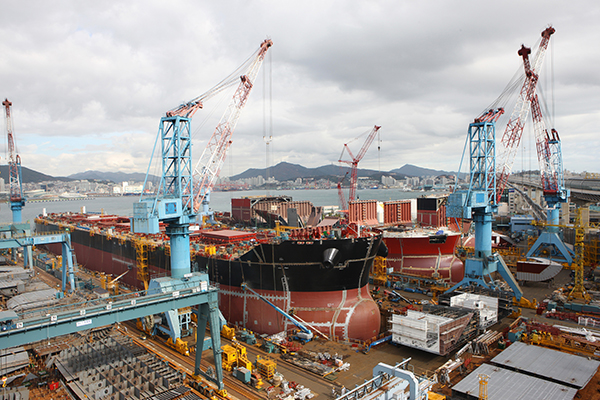 Shares of South Korea’s Hanjin Heavy Industries & Construction Co. on Tuesday returned to the Korean bourse after a three-month suspension following a capital redress only to be met with cold reception.

Hanjin Heavy stock stayed suspended over the last three months after its capital had been completely eroded due to losses from its subsidiary Subic shipyard in the Philippines that filed for an insolvency scheme earlier this year. The company’s net loss snowballed to 1.32 trillion won ($1.17 billion) last year, up from a loss of 278 billion won a year ago.

Hanjin Heavy has been making all-out efforts to get its business on track. Last month, its creditors both at home and abroad approved its business normalization plan and agreed to a debt-to-equity swap deal worth 680 billion won ($570 million) and capital reduction.

As part of its ongoing restructuring efforts to improve financial health, the company is seeking to sell its real estate assets worth 1.2 trillion won. It has already picked a preferred bidder for a land of 100,000 square meters in Incheon whose value is estimated at 131.4 billion won earlier this month and will join a project to build a logistics center on the site as a builder.

Hanjin Heavy said it will go all out to win more shipbuilding orders – in particular special purpose vessels – and improve the profitability of the construction business this year. Its shipbuilding division drew 1.6 trillion won worth orders to build 23 special vessels as of the end of April, and the construction division’s order backlog reached 220 billion won, according to the company.