Creditors led by state lender Korea Development Bank may have to sweeten the deal to sell Asiana Airlines Inc. amid little sign of interest in taking up South Korea’s debt-laden full-service carrier.

Repeated denials from plausible conglomerate names like Hanwha, Lotte, SK and CJ suggest they genuinely are uninterested in joining the flight business heavily crowded with budget carriers, according to insider sources.

Asiana Airlines’ debt ratio particularly spiked this year following the adoption of the IFRS 16 accounting standards. Under the new rules, 3 trillion won of the company’s operating lease that had formerly been treated as basic rental expenses now fell under the debt category. As a result, the airline’s debt on a consolidated basis surged to 9.7 trillion won in the first quarter, with a debt ratio of 895 percent. 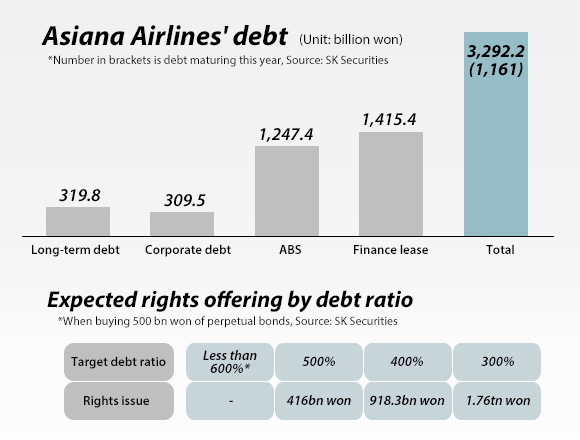 이미지 확대
Experts say Asiana’s profitability also doesn’t look very promising compared to competitors. Its revenue in the January-March period was similar to the same period last year at 1.72 trillion won. But it saw its operating profit drop 89.1 percent on year to 7.2 billion won and posted a net loss of 89.2 billion won, falling to the red compared to a year earlier.

Kumho Industrial is said to be seeking 1 trillion won for the stake sale plus management rights. But this could rise up to 2.5 trillion won when including the rights offering that is expected to follow as part of the carrier’s normalization efforts. Analysts say the offering would be required to lower the current debt ratio of mid-600 percent to a more manageable level of 400 percent.

Financial regulators and Asiana’s main creditor KDB had hoped to close the deal by the end of the year. But as this timetable now looks extremely unlikely, creditors may have to repackage the offering to entice interest.

Shares of Asiana Airlines finished Tuesday down 4.3 percent at 5,560 won.

By Kang Doo-soon and Kim Hyo-jin