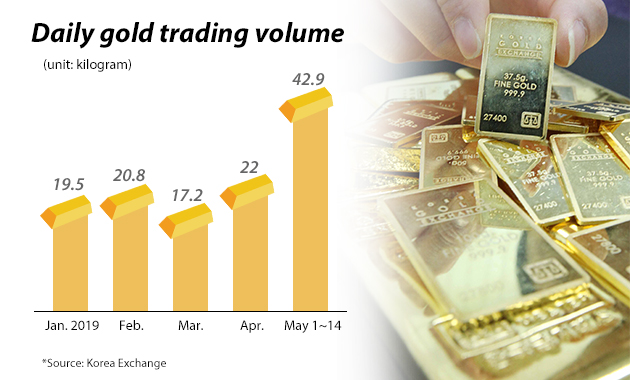 이미지 확대
Gold prices rose to its highest in a year in Korea on Wednesday in line with the jump in international prices amid growing uncertainties in the global capital market while trade surged on signs of protraction in the trade war between the United States and China.

According to the Korea Exchange, the price of gold closed Wednesday at 49,630 won ($41.74) per gram, breaking the 52-week high threshold after gaining 8 percent this year. Gold prices in the U.S. also hovers around $41.7 per gram. Daily transaction volume averaged 42.9 kilograms (kg) so far this month, almost doubled from an average 22-kg in April as institutions and retailers stocked up the safe asset amid spike in U.S. dollar and ongoing depression in the Korean currency and equities.

Mini gold bar sales also have surged last month, with sales at the country’s top four commercial banks – Shinhan, KB Kookmin, KEB Hana and Woori – almost doubled from March. KB Kookmin Bank temporarily stopped the sale of 10-gram and 100-gram mini gold bars at all its outposts in Korea from Monday due to a supply shortage on higher demand.

The surge in demand for gold is largely attributable to renewed trade tensions between the United States and China, according to market experts, as the financial markets in Korea have suffered amid soured investment sentiment. Investors have shifted their interest to safer assets to hedge any potential losses in the future, market analysts said.

The market speculation about redenomination to knock out some zeroes in Korean bills as a means to prop up the won value and inflation also fanned gold fever in Korea. Korea’s finance minister and central bank governor repeatedly denied the possibility.

By Chung Seul-gi and Lee Ha-yeon