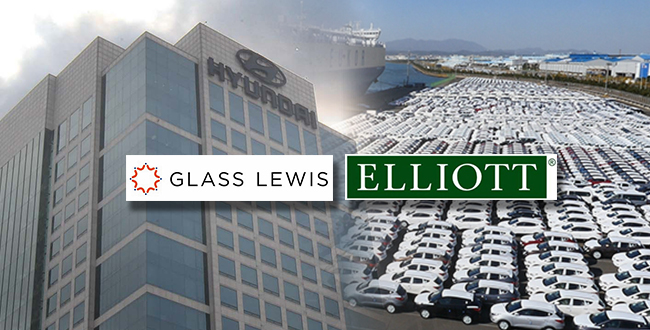 이미지 확대
South Korea’s Hyundai Motor Co. facing a proxy war with Elliott Management Corp. over dividend policy in upcoming shareholders’ meeting has gained a vote of confidence from Glass Lewis & Co. , a prominent adviser to institutional players, in its spending plan on future growth instead of lavishing on major shareholders.

Glass Lewis in its advisory guideline for shareholders of Hyundai Motor recommended they vote down Elliott’s demand for cash dividend of 21,967 won ($19.5) per common share, or combined 4.5 trillion won in one-time reward for shareholders, citing the automaker’s rich case reserve, at the general meeting on March 22 according to sources from the auto industry.

Glass Lewis is one of the world’s two most established proxy advisers with Institutional Shareholder Services (ISS).

“We remain reluctant to recommend shareholder support for such a large one-time dividend payout at this time,” Glass Lewis said in a report, “given the proposed timing and method of the capital return and the rapidly evolving nature of the auto industry, which we acknowledge will require significant R&D spend and potential M&A activity by the company in order to enhance its competitiveness and long-term financial returns.”

The proxy advisory firm also supported Hyundai Motor’s three candidates for independent directors and opposed to the nominees from Elliott.

Hyundai Motor already rejected the proposal last month, and its board approved an annual payout worth 1.1 trillion won including preferred shares instead. The Korean car maker also pledged to jack up its research and development spending to 45.3 trillion won over the next five years, using retained capital, to obtain future car technologies and stay competitive.

Market analysts said that the odds of Hyundai Motor winning against Elliott in a shareholder vote on the proposals have been raised, as many foreign investors are expected to follow recommendations of Glass Lewis.