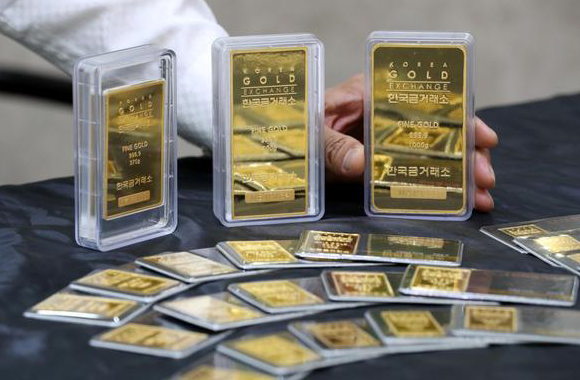 이미지 확대
Gold prices have been skidding after peaking in August amid reduced demand for safe assets due to eased tensions on the trade front, logging negative returns for funds tracking the prices.

Gold prices in Korea surged 33 percent since the beginning of the year to reach their peak in August, boosted by investors’ strong risk aversion tendency amid escalating trade disputes of the world’s two biggest countries as well as the shift to monetary easing drive by central banks of big economies. But the prices began falling since September on growing hopes for a breakthrough the U.S.-China trade war, which has been strengthening appetite for more profitable investment.

Due to the plunging prices, gold funds in Korea yielded 8.6 percent in the negative over the past three months, according to Seoul-based market tracker FnGuide. Returns on the funds were still pretty high at 15.7 percent since the begging of the year, but not for latecomers who injected a combined 62 billion won ($52.5 million) to the funds in August and September. Their sum is, almost seven times higher than total net inflow this year.

Market analysts have mixed opinions on the outlook of gold funds. Kim So-hyun, an analyst from Daishin Securities, said that the gold prices are under a correction period and it is unlikely to fall below $1,400 per ounce (31.1 grams) due to the slowdown in global economic growth and high demand for jewelry from China and India.

By Hong Hye-jin and Choi Mira