이미지 확대
South Korea’s largest institutional investor National Pension Service (NPS) has deferred a decision on a proposal that would enable it to pursue greater shareholder activism amid controversy over the excessive role of NPS in corporate management.

The fund management committee – NPS’s highest decision-making body – did not finalize on guidelines that would make the world’s third largest pension fund with assets under management stood at 714.3 trillion won ($605.8 billion) able to be more engaged in management to uphold shareholder rights.

The guidelines introduced by the Ministry of health and Welfare in Nov. 13 intend to allow NPS to have power to request removal of certain board members of companies that are convicted of corporate crimes, such as embezzlement and breach of duty, as well as those firms that repeatedly cast a dissenting vote at board meetings. The ministry planned to finalize on the guidelines after two weeks of feedback from the NPS’s fund management committee.

But during the fund management committee’s meeting on Friday, representatives on the corporate side still raised concerns that the NPS’s more aggressive shareholder role could lead to excessive interference in companies. They also complained that conditions for NPS’s active shareholder activity remain yet ambiguous or unpredictable.

On the other side, the labor circle complained about the lengthy steps in the guidelines that the NPS has to go through to exercise its shareholder rights on key issues. 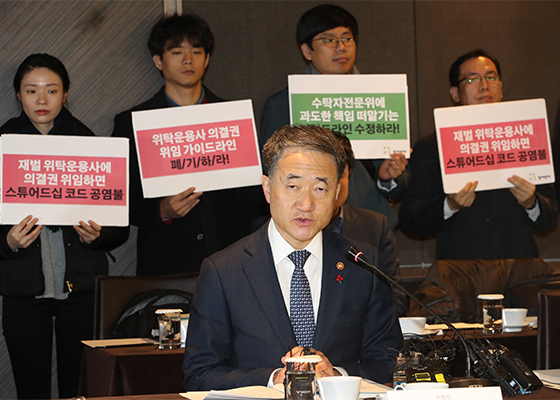 A day before the meeting on Friday, the ministry “toned down” the wordings from the initial proposal to reflect some concerns from both sides, but the fund management committee could not make a final decision on it.

Park Neung-hoo, Korea’s welfare minister, said in a briefing on Friday that the NPS’s highest-decision making body agreed on the need to set specific guidelines after dispelling unnecessary misunderstanding and said it will re-discuss the guidelines.

Industry insiders, however, expected that the government is likely stick with its push for greater shareholder activism of the NPS based on the initial proposal despite controversy as the government maintains its stance that there is no legal issue tied with the pension operator exercising shareholder rights to remove certain board members under commercial law and capital market act.