Samsung Biologics to push CDO business as big as CMO 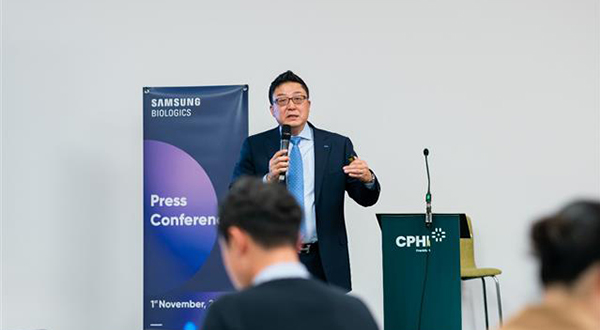 Samsung Biologics is driving efforts to attract new customers in contract development organization (CDO) business beyond mainstay contract manufacturing organization (CMO) with a focus on its operational agility and digital transformation, according to its executive on Tuesday.

The company’s fourth plant in Songdo, Incheon was built only in 23 months and became a global CMO leader in terms of production capacity.

“It took only 23 months for us to build the fourth plant. It usually takes 48 months. We also shortened the technology transfer period from 6 months to 3 months. This represents our speed and digital capabilities,” James Park, executive vice president and head of global sales center at Samsung Biologics, said during a press conference held in Frankfurt, Germany, last Tuesday.

For the fourth plant which already entered partial operation, Samsung Biologics employed what it calls the parallel construction method, which conducts external construction and internal facility work simultaneously. The company succeeded in curtailing the total construction period by 40 percent with this method.

Another competitive advantage Samsung Biologics boasts of in terms of speed is its fast production of drug substances through its proprietary cell culture technology. The company conducts cell culture and impurities removal at the same time in the stage just before the final cell culture. With this method, the company shortened the production period by up to 30 percent.

Samsung Biologics is speeding up efforts to secure global Big Pharma customers based on its CDO competitiveness. The company also highlighted digital capabilities as one of its key competitive edges. Live Virtual Tour (LVT), which was implemented for the first time in the pharmaceutical and biotech industry, is a case in point.

By Shin Yoo-kyung and Minu Kim