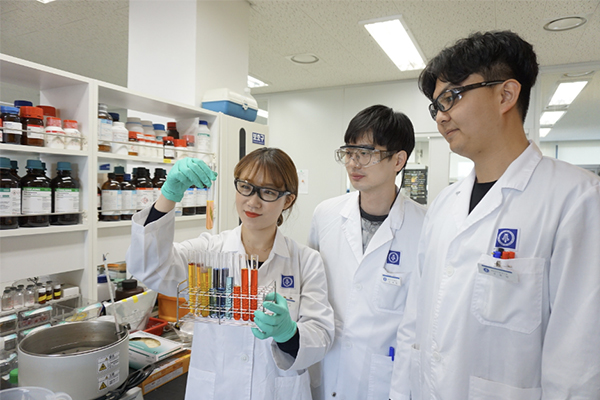 Hanmi Pharmaceutical’s LAPSTriple Agonist, a candidate for a triple-acting first-in-class drug that simultaneously activates glucagon, was recently designated by the European Medicines Agency (EMA) as an orphan medicine for the treatment of idiopathic pulmonary fibrosis (IPF), a chronic condition where the lungs become scarred to make breathing difficult due to thickening and stiffening of tissue within the lungs.

When diagnosed after the onset of symptoms, patients have only three to five years to live. In the United States, the drug received Fast Track designation from the Food and Drug Administration (FDA) for expedited development as a treatment for non-alcoholic hepatosteatosis (NASH). The FDA’s orphan drug designation for IPF treatment was granted in 2021.

Hanmi Pharmaceutical, which is conducting preclinical trials to treat IPF, has the largest number of orphan drug pipelines in Korea. It is evaluating six novel therapies with 20 orphan drug designations for the treatment of 10 disorders.

Orphan drug designation is granted to medicines to address a life-threatening or chronically debilitating rare disease. In Europe, orphan drugs are eligible for reduced fees for applying regulatory approval and 10-year marketing exclusivity.

JW Pharmaceutical launched Hemlibra in 2020, which is a hemophilia A preventive therapy developed by Japan’s Chugai Pharmaceutical, following its license agreement with the Roche subsidiary in 2017.

JW Pharmaceutical is also expanding indications of the drug for non-antibody hemophilia A patients and is negotiating with cost regulators over potential insurance coverage.

Chong Kun Dang is working on CKD-510, which is targeting a rare disease called Charcot Marie Tooth disease (CMT). CMT is a rare genetic disease that occurs in about 1 in 2,500 people, and there is no treatment available worldwide. The company already presented Phase 1 clinical trial and non-clinical results that demonstrated the drug’s safety and tolerability at a global academic conference held in Miami in May.

Daewoong Pharmaceutical’s investigational DWN12088 was recently designated as an orphan drug by the FDA for the treatment of idiopathic pulmonary fibrosis and systemic sclerosis. Last month, the FDA approved the company’s Phase 2 trial protocol for idiopathic pulmonary fibrosis. The antifibrotic agent is a prolyl-tRNA synthetase (PRS) inhibitor that can reduce the overproduction of collagen that causes fibrosis.