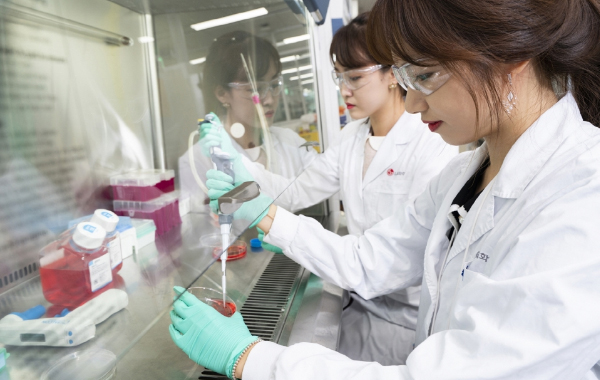 LG Chem Ltd. announced on Wednesday that “LC542019", a new drug candidate for type 2 diabetes, has been approved by the U.S. Food and Drug Administration (FDA) for a Phase 1 clinical trial.

Type 2 diabetes is the most common type of diabetes, accounting for around 90% of all diabetes cases. Cells of patients with Type 2 diabetes do not respond properly to the amount of insulin that is produced by the body due to insulin resistance, leading to high rates of glucose.

LG Chem said its LC542019 improves insulin resistance and lowers blood sugar by activating effects of GPR120, an insulin sensitivity regulating protein. Its mechanism of improving desensitized insulin reaction is different from the currently widely used diabetes medicines that aim to make body release more insulin, and LC542019 could be the first drug to improve drug resistance. GSK, a multinational pharmaceutical company, has also been conducting research on this as well.

Another Korean major pharmaceutical company Ildong Pharmaceutical announced on the same day that it has obtained a new drug licensing for “IDG16177”, and its first phase clinical trial is currently underway in Germany.

Hanmi Pharmaceutical announced in June that it had conducted Phase 3 clinical trials for “Efpeglenatide”, which was returned to the Korean company from Sanofi, a French healthcare company that in 2015 agreed to develop the drug under a license-out agreement. This new, long-acting diabetes biologic drug is a once-weekly GLP-1 receptor agonist drug. Phase 3 clinical trials for Efpeglenatide were conducted on 4,000 people in 28 countries.

DPP-4 inhibitors, which was released 15 years ago, still account for more than half of the Korean diabetes drug market. DPP-4 inhibitors block the action of DPP-4, an enzyme that destroys the hormone incretin which helps the body produce more insulin when it is needed. But the DPP-4 inhibitor market has been on the decline recently because chronic patients have to use a new drug when they develop drug tolerance and also because they are used in combination therapy, according to an insider in the pharmaceutical industry. The domestic diabetes medication market is worth about 1 trillion won, while the global market is estimated to be about 140 trillion won.

By Chung Seul-gi and Susan Lee