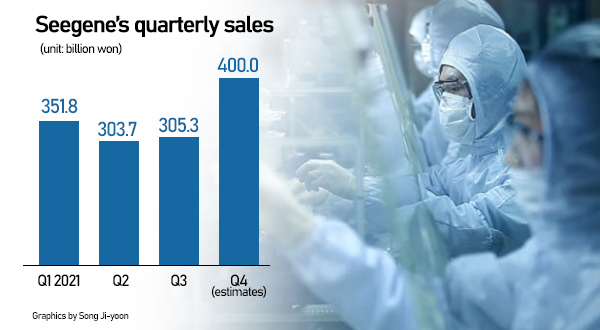 이미지 확대
South Korean multiplex molecular diagnostics company Seegene Inc. has seen monthly sales more than double from the year-end and expects record-breaking streak in sales for the third year of pandemic as demand for test kits remains unfazed due to variant threat, according to a senior executive.

“Monthly sales that averaged 100 billion won ($84 million) until September last year picked up to double the average in December,” said Kim Bum-Joon, the Chief Management Officer at Seegene in an recent interview with Maeil Business Newspaper.

Seegene achieved sales milestone of 1.1 trillion won in 2020, the first year of pandemic. It estimates stronger growth last year and for this year.

“There had been doubts about Seegene in the pandemic wake. But given the ‘living with Covid-19’ environment around the world, demand for test kits is expected to go on,” he said.

Currently, about 90% of Seegene`s annual sales are generated from overseas, with the bulk coming from Europe. On Dec. 19, 2.8 million diagnostic reagents were airlifted on a chartered flight to five European countries and on Dec. 29, 1.7 million were sent to Israel.

The company this year expects a boon from the United States, where the federal government is handing out 500 million test kits for free to tackle record surge in infections.

Despite high barriers for foreign companies because of the competition and the tendency for U.S. government to prioritize its domestic companies, Seegene’s test equipment gained FDA approval without going through a separate product development process through the partnership with Bio-Rad.

By Kim Si-gyun and Susan Lee