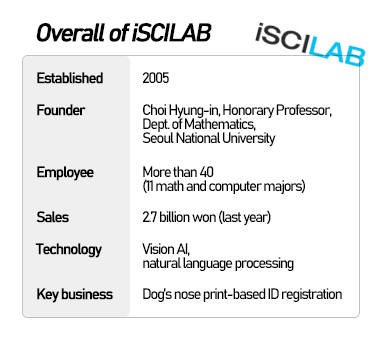 이미지 확대
A Korean AI startup is working to launch a free app to scan and register a dog’s nose print as a cheap and simple identification means for companion animals over existing microchip embedded under the skin.

ISCILAB is planning to announce a free dog nose print registration service at a pet show to be held in Daegu on June 10, the company’s chief executive Choi Hyung-in told Maeil Business Newspaper.

The company founded by Choi, Honorary Professor of mathematics at Seoul National University, in 2005 has about 40 employees in Korea and Vietnam.

Under the current animal protection law enacted in 2014, pet owners are required to register companion dogs using a microchip, but actual registration remains inactive because of low awareness and additional costs. A veterinarian injects a microchip for pets for about 50,000 won ($40) to 100,000 won.

이미지 확대
The company is offering a free beta app called ‘anipuppy’ for dog’s nose print registration. This will be cheaper than a microchip method even it becomes a paid service in the future, and gives no pain or discomfort to dogs, Choi said.

To register, download the app via a smartphone and scan the dog’s nose for seconds. Choi said using the nose print will be a world standard for pet ID registration in the future.

The Korean government supported the company’s technology development with a state grant worth 1.1 billion won over the past three years. iSCILAB published two SCI articles on its technology and obtained multiple related patents.

Legal support is also necessary to add nose print-based registration to the current law that recognizes only an RFID-based system. An additional demo project is required to test the new method’s safety ahead of commercialization.