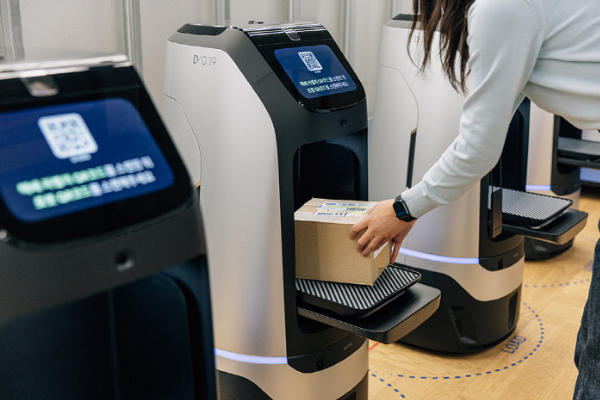 Parcels and coffees are delivered by robots at Naver’s new headquarters “1784” through cloud-based automation collaborated between Samsung Electronics and Naver Cloud.

The autonomous mobile robot services leverage both Naver and Samsung’s technologies to introduce the world’s first private 5G use case, bringing immediate benefits within the building, the two companies announced on Thursday. There are 40 robots moving around three floors within the 1784 headquarters to provide convenience services such as delivering packages, coffee, and lunch boxes to employees.

Naver Cloud operates the global IT infrastructure and enterprise solution services for Naver and its subsidiaries. The company’s new headquarters serves as a test bed to explore technologies of the future, where 5G network and cloud play a central role.

During 2019 CES, Naver demonstrated its ‘5G brainless robot’ technology, which makes its cloud act as a shared brain for the robot instead of a built-in chipset. Samsung’s private 5G network plays the role of a neural network that connects the robots and the cloud, enabling the cloud to control and support tens of thousands of robots in real-time.

Samsung’s commercial private 5G solutions powering Naver’s application includes its Compact Core and 5G radios supporting 4.7GHz and 28GHz spectrums, which are dedicated for private 5G network in Korea, according to a statement from Samsung Electronics.