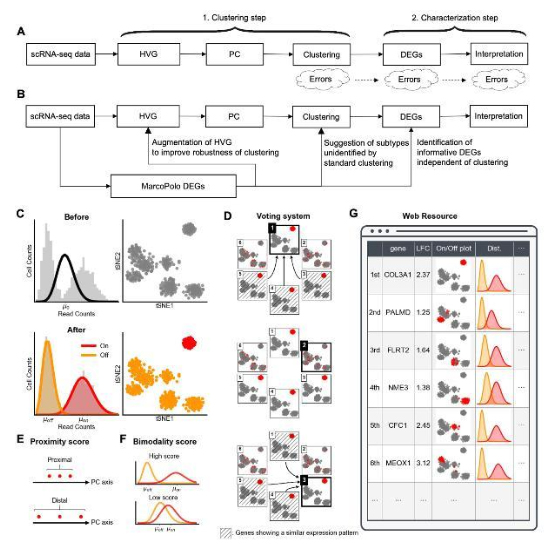 이미지 확대
A team of Seoul National University professors and students have developed an artificial intelligence algorithm that can discover key gene markers for disease treatment, paving the way for faster and cost-saving drug development.

The research on the development was led by Kim Chan-woo, a Ph.D. student in computer engineering at the University of Washington, and Lee Han-bin, a SNU College of Medicine student, who contributed as co-first authors. Kim was affiliated with SNU’s Dept. of Electrical and Computer Engineering during the research.

To understand pathogenesis-related proteins and their genes and develop a corresponding therapy, it is necessary to discover cell types and marker genes that can be therapeutic targets as well. For this discovery, researchers use single-cell RNA sequencing (scRNA-seq) technology, which makes it possible to classify specific cell groups such as rare cells by individually measuring each cell’s gene expression and to discover key marker genes expressed in specific cell types.

However, this technology has an accuracy problem because human errors can occur in the preceding process of cell clustering.

The researchers also said that they applied Marco Polo to human stem cell and liver data and successfully discovered marker genes that otherwise could not be properly classified with existing methodologies.

The research finding was published in a recent edition of Nucleic Acids Research.