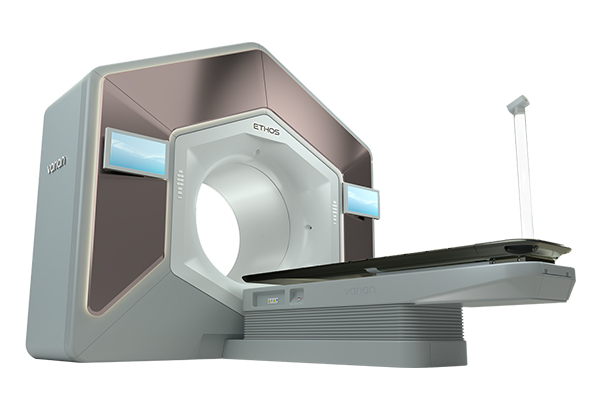 A cancer patient became the first person to have artificial intelligence (AI)-driven radiotherapy with a new Varian Ethos therapy system designed to reduce a typical 1-hour or more treatment timeslot to less than 15 minutes in South Korea.

Ethos first developed in Chicago in 2019 is one of Varian’s latest solutions. It was approved by Korean health authorities last year and was first installed at Ewha Womans University Seoul Hospital in October this year.

Using the medical device is still away from the regulator’s reimbursement list in Korea, but the first-time treatment cost for the above-mentioned patient was known to be similar to that of existing radiotherapy equipment.

Ethos has brought innovation to the cancer treatment landscape with more than 60 units installed in more than 20 countries, including the United States, Britain, Australia, Denmark, and Japan.

Ethos Therapy powered by AI allows doctors to adapt to changes in normal tissue anatomy and radiation target structure on a daily basis, slashing the entire treatment planning and delivery by three quarters with significantly reduced side effects.

In 10 years, more than 50 percent of cancer patients in Korea would receive AI-based radiotherapy treatment such as Ethos, Choi projected.

Varian founded in 1948 has operated in more than 70 countries around the world and maintains its undisputed No. 1 position in cancer radiotherapy with its equipment and software exposed to 4 million patients every year. The brand entered Korea in 2012, and 65 percent of local hospitals with radiation oncology departments rely on Varian equipment, and more than 70 percent on its software.