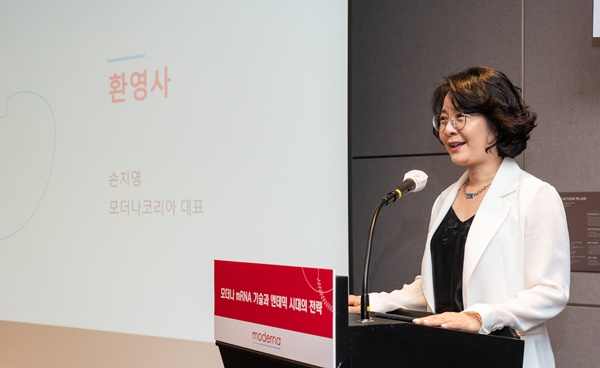 Moderna is expected to introduce a variety of messenger ribonucleic acid (mRNA)-based products to South Korea within 10 years, and among them, an mRNA-based flu vaccine will soon hit the Korean market, Sohn Ji-young, General Manager of Moderna Korea told Maeil Business Newspaper during a recent interview.

The U.S. biotech company is already running a program of 46 mRNA-based candidates. It is currently conducting a clinical trial in Korea for its mRNA-based RSV vaccine and is speeding up research for a combination vaccine that can prevent flu and Covid-19 at the same time.

“We are also advancing the development of an mRNA anti-cancer vaccine, and this will also be introduced in Korea within a few years,” Sohn said.

Sohn had worked for global pharmaceutical companies for about 20 years. After studying pharmacy at Ewha Womans University and receiving an MBA at Korea University, she built her career at Pfizer Pharmaceuticals Korea and Roche Korea and served as CEO of CSL Behring Korea before being appointed to head Moderna Korea last year.

Since Nov. 11, Moderna has been distributing its bivalent vaccine that targets the original Covid-19 virus strain and the Omicron BA.1 subvariant in Korea where the death toll from Covid-19 surpassed 30,000 to date. The company’s new vaccine against the more recent BA4/5 omicron strain will also be shipped to Korea soon after emergency use approval is granted, Sohn said.

Korean health authorities are reviewing the safety of Moderna’s BA4/5 vaccine, and the approval is anticipated to occur within this year, according to Sohn. But many Korean people are reluctant to have the additional Covid jab despite a resurgence of sporadic cases in winter. Only 4.3 percent of the entire population completed a fourth shot with a bivalent vaccine as of Nov. 18.

“In some countries, the bivalent vaccination rate reaches 40-50 percent, and even in countries with low inoculation rates, the figure is above 20 percent,” Sohn explained, raising concerns that Korea’s vaccination rate is absolutely lower than that of other countries.

Regarding myocarditis, which is one of the known side effects of mRNA vaccines, she said, “this is a phenomenon that occurs not only in mRNA vaccines but also in other vaccines with different mechanisms of action. The risk of myocarditis caused by direct infection is much greater the risk from a Covid-19 vaccine.”