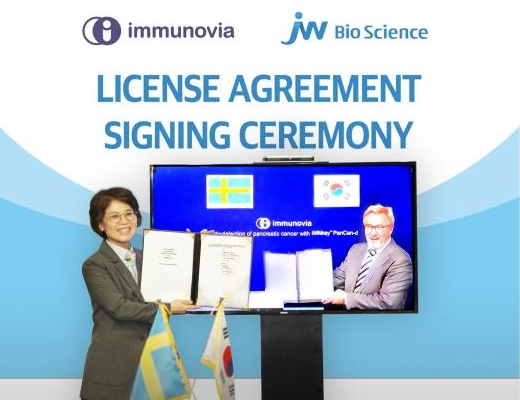 JW BioScience, a subsidiary of South Korea’s JW Life Science, has signed a non-exclusive agreement to license out its diagnosis technology for early detection of pancreatic cancer to Swedish company Immunovia AB, the company announced on Tuesday.

The license agreement encompasses key diagnostic technology developed to detect early-stage pancreatic cancer based on the use of two biomarkers of CFB and CA19-9. JW BioScience is a marketing right holder of the technology in Korea, the U.S., 21 European countries, China, and Japan.

The deal gives Immunovia global commercial rights for the technology, but the details and deal size are not disclosed as agreed by both parties.

The contract represents a recognition of the excellence of JW technology in the global market and JW will be able to further strengthen its technological competitiveness through the collaboration with Immunovia, said JW Bioscience CEO Hahm Eun-kyung.

JW BioScience is developing an early diagnosis kit that uses these biomarkers to detect pancreatic cancer.

Immunovia AB develops and sells highly accurate blood tests for the early detection of cancer and autoimmune disorders based on its own platform.