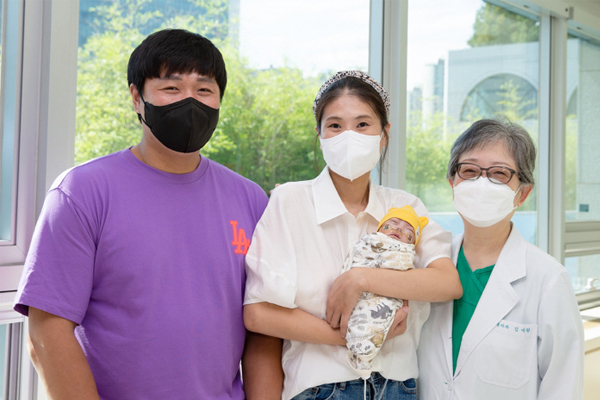 이미지 확대
The first ultrapremature baby of under 290-gram birth weight in Korea - Cho Kun-woo – was released from hospital healthy weighing over 2kg after 153 days of intense medical care.

Asan Medical Center said Monday that Cho, a very low birth weight infant, a term for babies born weighing less than 1.5 kilograms (3.3 pounds), was released from the hospital, after being born as the smallest baby in South Korea on April 4. It is considered very rare for infants like Cho weighing under 400 grams to survive.

According to a registration web site for infants born with a birth weight of less than 400 grams managed by The University of Iowa, Cho will be registered as the 32nd-smallest baby in the world among 286 babies.

Cho’s mother, in her 17 week pregnancy, was diagnosed with intrauterine growth retardation, in which a baby in the womb does not grow for the stage of pregnancy. The mother came to Asan Medical Center all the way from Haman, South Gyeongsang Province, in late March, for care with a ray of hope. She was then hospitalized after consultation with medical staff.

She was immediately injected steroid and magnesium sulfate that helps maturation and brain development of the fetus. The heart rate, however, fell continuously, and to prevent further risk of the fetus, the staff decided to go for emergency caesarean section.

The baby – born 15 weeks before due date – was unable to carry out his own spontaneous breathing with premature pulmonary alveoli. He was immediately injected surfactant and his heart started beating and was put under intense medical care from then onwards.

The medical staff at Asan had previous experience surviving previous smallest baby Sarang born at 302 grams three years ago but the challenge with Kun-woo had nevertheless been nerve-racking.

The baby however prevailed at every critical moment. Eighty days after birth, Cho removed artificial ventilator and was able to breathe on his own. He also gained weight to over 2 kilograms five months after birth.

Kim Ae-ran, professor at Asan Medical Center and the baby’s doctor, said that she is very happy for Kun-woo’s release and that births of premature babies are rising with increased artificial insemination due to maternal aging and subfertility.

“Treatment technology has improved, thankfully, and success rate of treatment for premature babies is also improving,” she said.

In Korea, there are about 3,000 very low birth weight infants weighing less than 1.5 kilograms being born every year.

Asan Medical Center has seen 19 very low birth weight infants weighing under 500 grams being born over the past three years. More than half of them survived.

By Lee Byung-moon and Lee Eun-joo