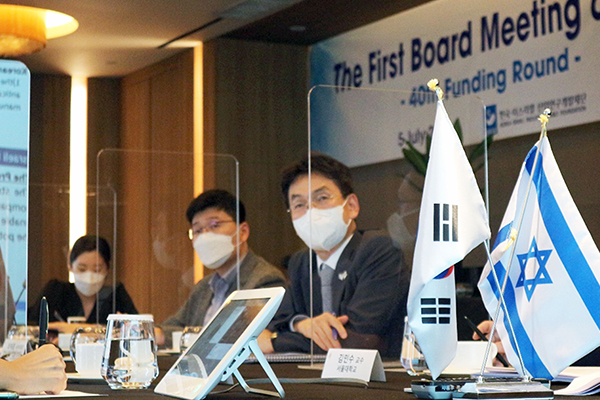 [Photo provided by the Ministry of Trade, Industry and Energy]

The KORIL-RDF board meeting under the auspices of by the Ministry of Trade, Industry and Energy in Korea and the Ministry of Economy and Industry in Israel deliberates and approves joint R&D projects to be funded. The bi-national foundation incorporated in 2001 aims to manage the joint R&D fund and to support technological collaboration between private companies in the two countries in accordance with the signing of the Korea-Israel Industrial Technology Cooperation Agreement in 1999.

With the approval, Korean medical device company Healcerion and Israeli AI system company Onsight Medical will jointly develop an AI guide-based ultrasound system for self-diagnosis to be used in the future telemedicine market. Genemedicine, a Korean biotech firm specializing in anti-cancer adenovirus, and its Israeli partner NanaGhost will cooperate for the development of a new type of gene-cell combination therapy based on the encapsulation of oncolytic virus.

In addition, the two countries finalized the four major strategies for expanding technological cooperation between the two countries, which include the organization of webinars and corporate idea pitching events on a regular basis.