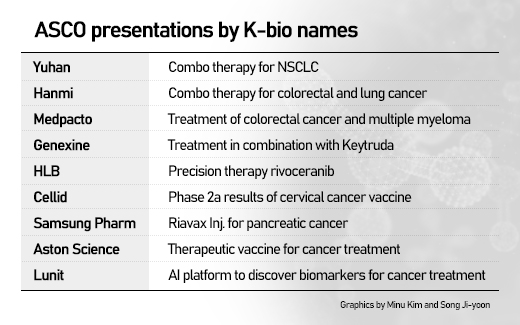 이미지 확대
Korean biotech ventures and healthcare companies have come under limelight for their latest insights and discoveries for cancer treatment in the annual meeting of the American Society of Clinical Oncology (ASCO) that started online last Friday.

Lunit, a medical artificial intelligence company, announced four abstracts last Friday, including one where it claims a biomarker for cancer treatment can be used through its AI-based tissue analysis platform `Lunit Scope IO`. Lunit analyzed the density and distribution of immune cells in the tissue slides from cancer patients with Lunit Scope IO, and gave scores based on internal criterion. It demonstrated that the higher the score, the better the prognosis for immunotherapy treatment.

Vuno presented the results of analysis of tissue slides from 351 liver cancer patients with its AI-based pathology research platform Vuno Med Path-Lab. The company was able to confirm `cell density by region divided by lymphocytes` is a major variable in predicting the survival rate of liver cancer patients.

Cellid, which is developing a Covid vaccine, made an oral presentation of a phase 2a trial of BVAC-C, a cervical cancer vaccine. It carried out a study on 21 patients with relapsed and metastatic cervical cancer due to infection with HPV 16 and 18 who failed to respond to a standard therapy. The vaccine showed an objective response rate (ORR) of 27 percent with a disease control rate (DCR) of 40 percent in 15 patients. The progression-free survival (PFS) was four months, an improvement compared to existing therapies. One patient achieved complete response.

HLB is due to present multiple study results of oral precision cancer drug rivoceranib. The studies include a post-market surveillance study of the drug as a third- or later-line therapy in 2,004 patients with gastric cancer in China, as well as a global phase 3 study of rivoceranib in combination with Jiangsu Hengrui Medicine’s cancer drug camrelizumab in liver cancer.

Large Korean pharmaceutical companies also drew attention for their latest clinical trial results. Yuhan Corporation announced two new study results to evaluate its non-small cell lung cancer drug Leclaza in combination with Janssen’s amivantamab. In one study, the combo therapy showed an ORR of 36 percent with one case of complete response and 15 cases of partial response in 16 patients out of 45 who resisted comparator drug Tagrisso. 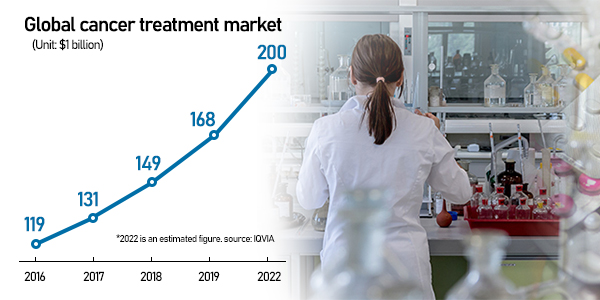 Samsung Pharm presented results of a Phase 3 clinical trial of Riavax Inj. to treat pancreatic cancer. The immunotherapeutic drug, a peptide derived from human telomerase consisting of 16 amino acids, works to activate immune cells to attack the cancer cells. In the study involving 148 patients with locally advanced and metastatic pancreatic cancer in 16 hospitals across Korea, the overall survival in the treatment group was 11.3 months versus 7.5 months in the comparator group. There was no new safety signal, demonstrating its clinical benefit.

The annual meeting of the ASCO is the largest medical meetings in the world, with some 40,000 attendees sharing information and learning from studies about the current leading edge of cancer research.

According to global market research firm IQVIA, the global cancer treatment market is estimated to grow to $200 billion in 2022 from $119 billion in 2016.