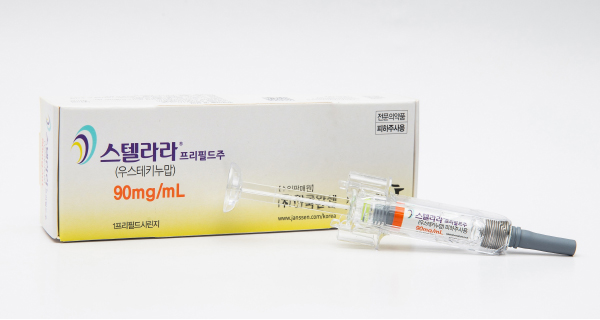 이미지 확대
Korean biosimilar companies are in the competition over $8 billion market of biosimilars for Stelara (ustekinumab), a blockbuster prescription medicine to treat psoriasis with the original drug’s patent nearing expiry.

Celltrion, Samsung Bioepis and Dong-A ST have been engaged in the development of the biosimilar version of ustekinumab to come up with competitive duplicate by the time the market becomes liberalized.

Celltrion started a phase 3 study in Europe in January, while Dong-A ST entered a phase 3 trial in the U.S. this month. Samsung Bioepis is at a phase 1 stage in Europe.

Stelara developed by U.S. Janssen is widely used not only in the treatment of psoriasis but also other autoimmune diseases such as rheumatoid arthritis and Crohn’s disease.

The original drug’s patent protection ends with the maturity in September 2023 in the U.S. and July 2024 in Europe.

U.S.-based Amgen has been viewed as a front runner in this race as its commercial development is at the most advanced stage. The company which has a track record of launching several blockbuster drugs is preparing to test its own biosimilar version for Stelara in a phase 3 trial of 542 patients in the U.S. in August next year.

Chinese biopharma Bio-Thera Solutions recently started a phase 3 study of BAT2206, its biosimilar version for Stelara, involving 406 patients with a goal of completing the study by May 2023.