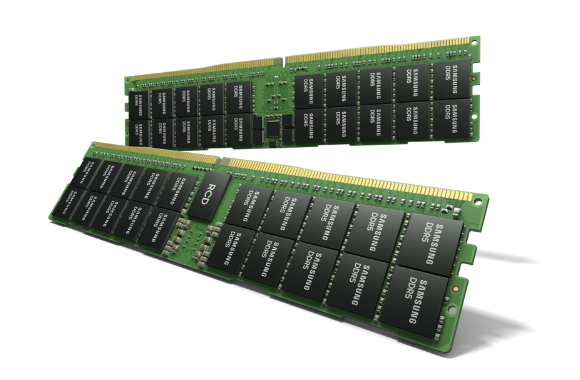 Samsung Electronics Co. has introduced 512-gigabyte (GB) DDR5 memory based on High-K Metal Gate (HKMG) technology, the fastest and most energy saving memory for data server up to date.

Its DDR5 memory claims data transfer speed of maximum 7,200 megabits per second (Mbps), according to its press release. At this speed, it can transmit two 30-GB ultra high definition movies in a second. Its DRAM rival SK hynix’s latest DDR5 boasts maximum speed of 5,600 Mbps.

The 512GB DDR5 memory utilizes HKMG technology, which has been traditionally used in logic semiconductors, to reduce current leakage from insulation layer and thus use 13 percent less power.

Samsung is the first in the industry to introduce HKMG-based DDR5 memory, according to the firm. The HKMG was first adopted by the Korean chipmaker in 2018 for its GDDR6 memory.

“Samsung is the only semiconductor company with logic and memory capabilities and the expertise to incorporate HKMG cutting-edge logic technology into memory product development,” said Sohn Young-soo, Vice President of the DRAM Memory Planning/Enabling Group at Samsung Electronics.

The tech giant is currently working with Intel, one of its major clients and the world’s biggest seller of chipsets, for the commercial launch of the next-gen memory. The two will use the new DDR5 memory on Intel’s upcoming Xeon Scalable processors, code-named Sapphire Rapids, according to Carolyn Duran, Vice President and GM of Memory and IO Technology at Intel, cited in Samsung’s press release.